Tropical Cyclones are powerful storms that develop over the ocean, mostly during the summer months.  The Southeast is affected by tropical storms that form in the Atlantic Ocean and the Gulf of Mexico.

Why do I care? Almost every year the Southeast is affected by at least one tropical cyclone.  Inland areas as well as coastal areas have to deal with strong winds and heavy rains.

I should already be familiar with: Wind Shear, Coriolis Effect, Semi-Permanent Highs and Lows, Pressure

Tropical Cyclones are any large organized storms that form over warm water.  This includes everything from tropical depressions to massive category five hurricanes.  A tropical cyclone is said to make landfall when and where the center of the storm comes ashore.  The radius of most storms averages about 300 miles, so areas far from landfall can still feel the effects.

Probably the most important factor in hurricane development is an existing disturbance.  In the Atlantic Ocean these disturbances are usually provided by storm systems coming off the northwestern coast of Africa.  They begin as poorly organized groups of thunderstorms.  Another important ingredient for storm development is a warm sea surface temperature.  In order for a tropical cyclone to have enough energy to develop it must pass over sea surface temperatures that are at least 80°F, and the warmer the better.  One reason September marks the peak of hurricane season is because at this point in the year the ocean has acquired all the summertime heating but has not started to cool down yet, so sea surface temperatures are warmest.  Vertical wind shear also influences the development of tropical cyclones.  Strong winds aloft blow hurricanes apart, so low vertical wind shear is necessary for hurricane development.  High relative humidity in the surrounding air is also important because a tropical cyclone weakens if dry air gets wrapped up in it.  The Coriolis force is also important to tropical cyclone development.  In the Atlantic, most hurricanes develop between 5°N and 20°N.  An unorganized group of thunderstorms needs the Coriolis force to turn them into a rotating mass of thunderstorms and ultimately a tropical cyclone.  Between the equator and 5°N the Coriolis force is too weak to cause rotation, therefore tropical cyclones typically do not form here.

When disturbances first come off the African coast they are steered due west by the trade winds.  Because the coriolis force plays a role in the direction of winds, tropical cycles move in a northwestward direction rather than a southwestward movement at latitudes below 30°N. When the hurricane moves into latitudes above 30°N, the hurricane begins to steer back out toward the Atlantic Ocean in long curve with the aid of the prevailing westerlies. During the Atlantic hurricane season a high pressure center sits in the center of the ocean.  This high is called the Bermuda High, and it can have a profound effect on where hurricanes will go depending on its position.  If it is very close to the East Coast, the clockwise flow of air around the high will pick up a hurricane and cause it to make landfall on the Southeast coast.  If the high is farther east it will cause hurricanes to turn northward and stay out in the ocean, never affecting land. Some storms take very odd tracks that aren’t very well understood, so storm tracks can still be difficult to predict.

The storm surge is the rise in sea level associated with a storm over water.  It is the difference in what the sea level would be without the storm and what it is now that the storm is present.  A small amount of sea level rise is due to lower pressure under the storm, which causes the ocean water to bulge upward.  However, the main cause of a rise in sea level is wind.  The wind circulating around the hurricane pushes water onshore, causing the most dramatic sea level rise.  For areas at the coast, the storm surge can be the most deadly effect of the hurricane.  Farther inland, high winds, small tornadoes and intense rainfall cause most of the storm-related impacts.

This scale was developed to measure the damage potential of tropical cyclones.  The wind speeds listed in the scale are exact, but the central pressure and storm surge are approximate.  As of 2009, there is discussion at the National Hurricane Center of removing all parameters but wind from the Saffir-Simpson scale.  Generally, the lower the pressure, the higher the winds and storm surge.  Any hurricane that reaches a category 3 or higher is considered a major hurricane.

One graphic frequently used to show the predicted track of a hurricane is the forecast fan or cone of uncertainty.  This feature has been overused and under-explained.  This fan shows the areas that the center of the storm or the eye could possibly pass over within a given time frame, normally 3-5 days.  It does not encompass all the areas that could be affected by the storm because the effects of a hurricane extend well beyond the eye.  In reality, the eye of the storm only tracks within this cone about two thirds of the time, though that is improving with new forecasting techniques.  In the example of Hurricane Ivan from 2004, Ivan moved farther west and slower than predicted.  On September 10th, Ivan was expected to be just off the western coast of Florida by September 13th at 8pm Eastern time.  On September 14th at 4pm Central time Ivan ended up on the farthest western edge of the cone of uncertainty a day later than expected. 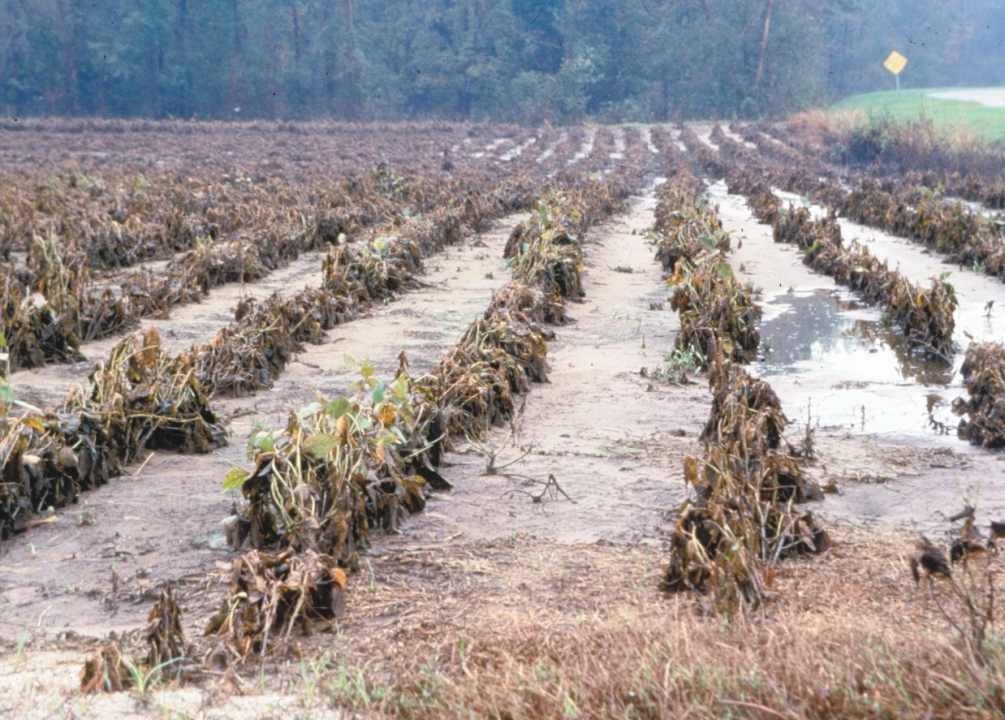 The effects of a hurricane can have devastating impacts on agriculture in the Southeast. Strong winds and heavy rains can damage and destory crops as well as livestock. Hurricane Floyd made landfall in Cape Fear, North Carolina as a powerful category 2 hurricane with winds of 104 mph. Floyd's path kept it mainly along the eastern half of North Carolina, but its sheer size made its effects felt through central North Carolina as well. A major concern for many farmers was the contamination of crops by flood waters. The heavy rains and flooding filled many hog lagoons and caused them to overflow their banks, contaminating nearby crops and farmland. Additionally, due to all of the flooding and contamination, the following year's seed crop was dramatically affected since much of the harvest was lost. 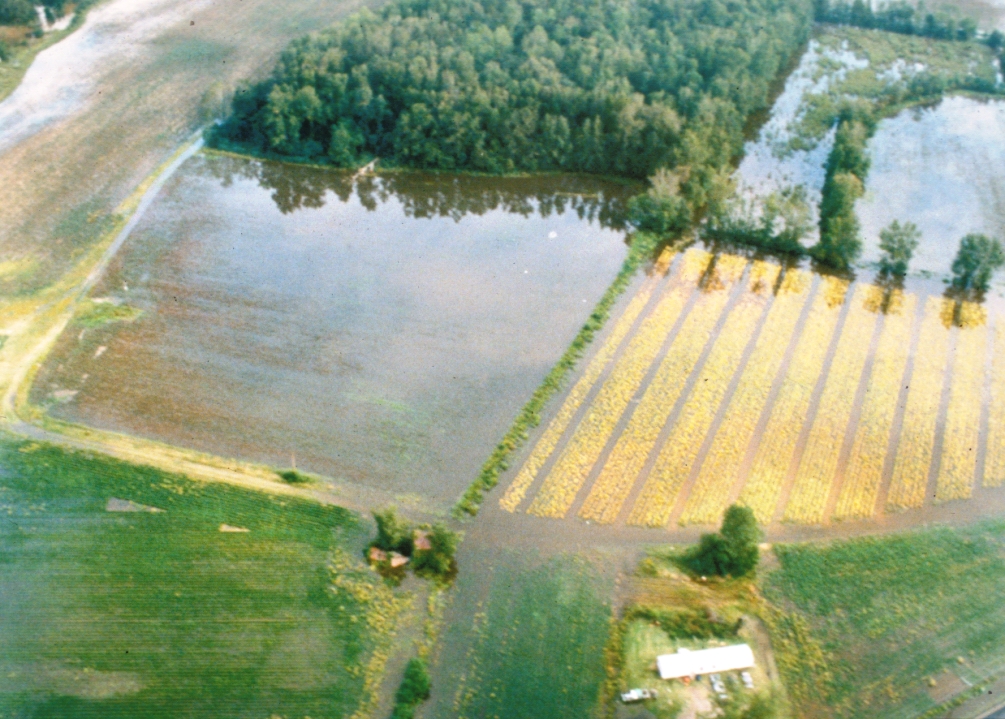 Agriculture losses from Hurricane Floyd tallied up into the millions for North Carolina. Crop damage from flooding and strong winds added to over 47 million dollars, while livestock damage was relatively small at $272,500. Damage done to equipment, buildings, and land added up to over 13 million dollars. Some counties were especially hit hard by the hurricane. Edgecombe County lost 1,156 of its 11,564 acres of its peanut crop, and estimates of the monetary loss from that totaled 7 million dollars.