Life Cycle of a Thunderstorm

A basic thunderstorm (single cell) goes through three phases during its lifetime: cumulus, mature, and dissipating. This can last between 30 minutes to an hour.

Why do I care?  If you see a thunderstorm coming, knowing what stage it is in could help you determine how much impact it will have on the area around you.

The three main ingredients for a thunderstorm to grow and develop are instability, moisture, and a lifting mechanism all explained in previous topics. The information below will further explain the development of thunderstorms when all of these ingredients are available. 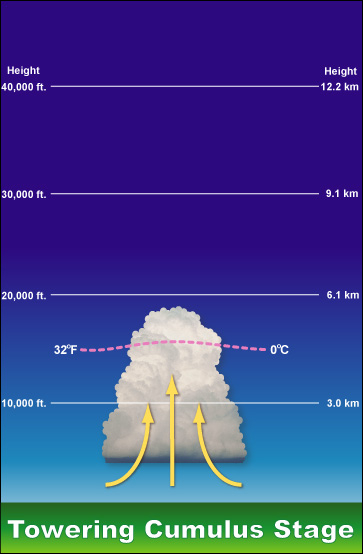 Figure A. The cumulus stage of a growing thunderstorm.

The life of a typical non-severe thunderstorm goes through three stages: Cumulus, Mature, and Dissipating. In the first stage (cumulus), we see the cloud that will become the thunderstorm starting to form and grow due to the rising thermal (or updraft). The rising updraft of air will begin to cool and condense as it rises, and in the case of thunderstorms, the thermal can travel tens of thousands of feet up before it finally stops! During this stage, small raindrops may begin to form and try to fall; however, the wind flow in the updraft can push the raindrops higher into the cloud rather than letting them fall out.  At that level the raindrops collide and join into larger droplets due to the churning turbulence in the cloud.

Eventually, the raindrops will become large and heavy enough to fall from the cloud to the ground. This marks the beginning of the second stage (mature). The term downdraft is used to describe the rain and the cool air that begins to descend from the thunderstorm. You can think of a downdraft as a blob of cool air in the cloud that is heading toward the earth’s surface (opposite of an updraft). Downdrafts can change the temperature rapidly in an area in a short amount of time. For example, during a hot, summer afternoon in Sattley, California, the temperature was a blazing 97 degrees at 4:00 P.M.  However, after a thunderstorm passed through the area, the downdraft dropped the temperature to a cool 57 degrees by 5:00 P.M., a 40 degree temperature swing in one hour!  However, most storms cool things off a more modest 10-15 degrees because of evaporative cooling. 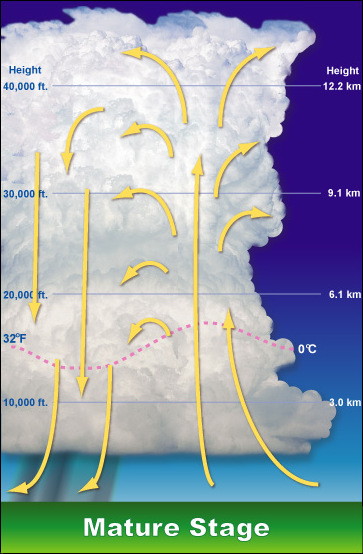 Figure B. The mature stage of a thunderstorm.

When the downdraft hits the ground, it begins to spread out in all directions. When this happens, a gust front can form. The gust front is basically a boundary that separates the rain-cooled air from the surrounding warm air shown in Figure C. Sometimes, a menacing-looking shelf cloud or roll cloud will form along the gust front.  As you can imagine, the wind behind the gust front can be very strong, sometimes even reaching severe levels. 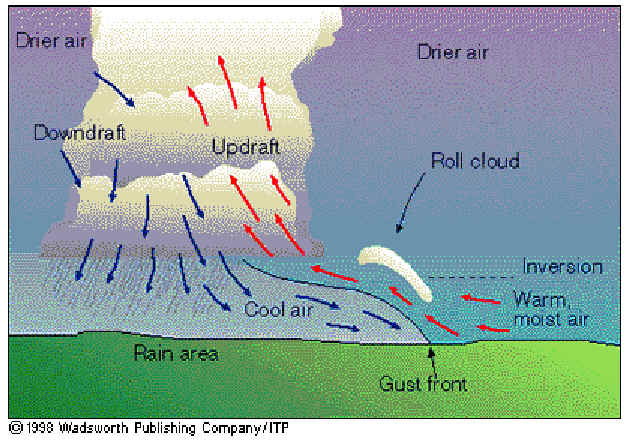 Figure C. A Gust Front located ahead of an approaching thunderstorm.

During the mature stage, the heaviest rain and (sometimes) hail fall from the storm. As long as the updraft can keep feeding the thunderstorm warm, humid air, it will continue to grow and intensify. However, the downdraft will usually end up killing  off the thunderstorm as it will cut off the updraft's supply of warm, humid air. Once this happens, the storm goes into its last stage (Figure D). 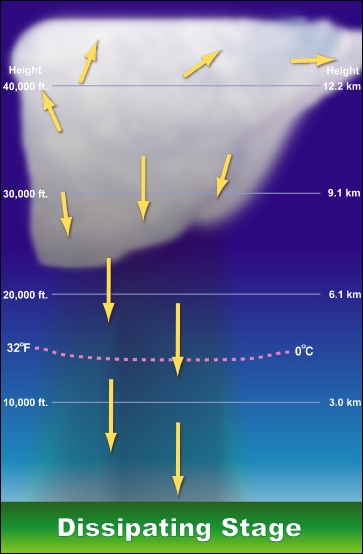 Figure D. The dissipating stage of a dying thunderstorm.

During dissipation, the updraft is very weak or non-existent, and the downdraft is the main dominant force in the thunderstorm. The thunderstorm slowly dies out and leaves only wispy clouds behind as evidence of its existence. This whole process usually goes by rather quickly and lasts about 30 minutes to an hour.

7th grade science: 7.E.1.3 : Explain the relationship between the movement of air masses, high and low pressure systems, and frontal boundaries to storms (including thunderstorms, hurricanes, and tornadoes) and other weather conditions that may result.