The information below focuses on the changes of temperature the Southeast United States experiences.

Why do I care?  Having basic knowledge of how an area is impacted by temperature as the climate changes is important for understanding what to expect for a certain season or month.

I should already be familiar with: Fronts, Temperature, Air Masses

The climate during the summer season across the Southeast is uniform in many areas. High temperatures usually range around the upper 80s to lower 90s for most of the Southeast except in the mountains where it is cooler due to the higher elevation.  Due to the close proximity of the Gulf of Mexico and Atlantic Ocean, it is usually humid and thunderstorms occur often in the Southeast region. 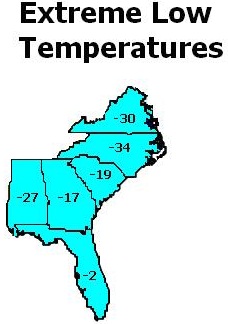 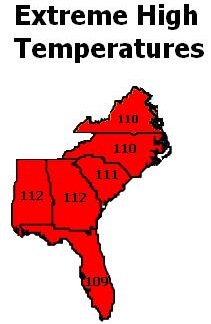 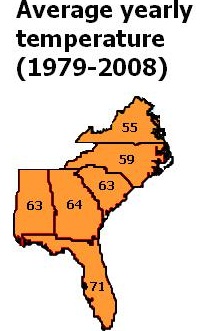 *Note: All temperatures listed on the maps are in degrees Fahrenheit.

North Carolina is expected to see a 4-7°F increase by the end of the 21st century. Moreover, its humid subtropical climate makes summer heat that much more significant. High humidity, warmer average temperatures and more extreme temperatures directly put more people at risk for heat-related death and disease, such as heat stroke and dehydration.1 For example, in North Carolina, the number of heat-related visits to the emergency department increases by 15.8 for every 1°F increase in temperature from 98°F to 100°F.2

In the summertime when air temperatures are already high, elevated humidity levels can increase people’s risk for heat-related illnesses.1 This is because humidity in the air interferes with the body’s natural cooling system, sweating. For example, a heat index demonstrates the effect of humidity on days when the air temperature is 95°F outside, but the high humidity levels make it feel 20°F hotter outside.3 Symptoms of overheating include heat cramps, heat fainting, heat exhaustion and heat stroke.

Older adults and young children are vulnerable to heat-related illnesses. However, over the past two summers (2011-2012), North Carolina has seen the greatest number of heat-related visits to the emergency department among men ages 25-64.4,5 In addition, heat stress increases the risk for other diseases, especially respiratory death. In the U.S., severe heat events account for more deaths than all other weather-related events combined each year. With increasing temperatures due to climate change, summertime heat-related deaths are expected to increase significantly, while wintertime deaths are expected to decrease slightly.1

Warmer temperatures also diminish air quality by increasing exposure levels of ground-level ozone. Ozone is a dangerous air pollutant that is damaging to lung tissue and lung function, and can exacerbate respiratory diseases such as asthma or chronic obstructive pulmonary disease (COPD).1,6 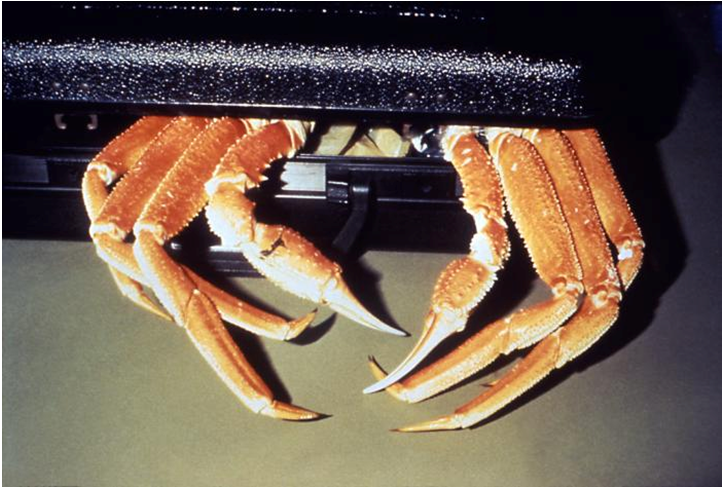 Figure D: Warmer temperatures may lead to diminished water quality, which in turn may lead to increased risk of foodborne illnesses from consumption of contaminated shellfish. (Image from US FDA).

Finally, rising mean temperatures may also diminish water quality, which will in turn impact human health. Warmer temperatures may lead to the proliferation of pathogens and harmful bacteria in drinking water, recreational waters, and marine waters.6 Exposure to these pathogens can result in waterborne diseases. For example, consumption of food such as shellfish that is contaminated with Vibrio vulnificus, a naturally occurring estuarine bacterium, generally causes vomiting, diarrhea, abdominal pain, and/or death. Moreover, warmer temperatures have been associated with an increase in harmful algal blooms (HABs) along the coasts of the U.S. Certain HABs are known to emit toxins that can cause neurological damage in humans.7

Indeed, the impact of rising temperatures in the Southeast is significant and not limited to just public health. In addition to increased heat-related illness, diminished air quality, and worsened water quality and availability, there may be increased demand for energy as well as changes in plant growth in North Carolina.8 The economy may also suffer, as evidenced by the unprecedented 2007-2009 drought in the Southeast region of the U.S. that resulted in a loss of over $1.3 billion due to destruction of major crops such as corn, wheat, soybeans, cotton, and hay.9,10

3AchooAllergy.com. The effects of humidity on the human body. 2000. <http://www.achooallergy.com/effects-of-humidity.asp> Accessed November 17, 2012.