The Southeast (as defined here) includes NC, SC, AL, GA, FL, and VA.  The Southeast gets an average of around 50 inches of precipitation each year, including some frozen precipitation in all areas except most of Florida and southern Georgia.

Why do I care? Precipitation types and patterns influence the vegetation that is supported in certain areas and what types of crops can be grown. By understanding patterns of precipitation, areas prone to flooding can be better equipped during time of need.

I should already be familiar with: Precipitation Types, Lifting Mechanisms

The Southeast Regional Climate Center (SERCC) includes Virginia, Florida, Georgia, North Carolina, Alabama, and South Carolina as states included in the "Southeast".  For the purposes of the information provided below, those are the states that will be discussed.  Maps are included here for precipitation averages from the years 1961-1990 that were produced by the National Climatic Data Center.  Values cited in the text are calculated from precipitation averages during the years of 1895-2009 that are supplied by the SERCC. Figure A shows the average precipitation totals for the contiguous US.  The values include the water equivalent of snowfall which contributes to the total precipitation an area receives each year.  A ratio of 10-to-1 for snow to rain is often used to estimate the water equivalent of snow (so that a 10 inch snow would equal a 1-inch rainfall) but in actuality a heavy wet snow can have a snow to water ratio of 5:1 and a very light fluffy snow in frigid weather can be more like 15:1.  This is why observers carefully melt the snow to get an exact measure of water content.  The Southeast has the second highest annual precipitation average of any region in the country after the northwest coast.  Figure B is a zoomed-in image of the Southeast.  The average annual precipitation for these states ranges from 43 inches in Virginia to 54 inches in Florida. Figure B. Annual average precipitation in the southeast US from 1961-1990.

Figure C is an image of the average number of days per year measurable precipitation falls in an area.  If you look at Alabama, you’ll notice something interesting.  Even though Figure B it is entirely blue, meaning it has a high annual precipitation total, Figure C shows it as light green with spots of yellow, meaning it has relatively few days with measurable precipitation compared to other areas.  This means that, on average, rain that falls here is heavier than the other states in the region  per event.  This is probably due to heavy rains produced by moisture coming from the Gulf of Mexico to its south. Figure C. Average Number of days with measurable precipitation in the southeast US.

Though all six states are in the same region, their yearly precipitation patterns are not the same.  Georgia and Alabama have wet summers, June through August, and also wetter than average winters, December through March.  The remaining four states, NC, VA, FL, and SC, have wet summers, June through September.  Florida has the starkest contrast with summer monthly totals 4-5 inches higher than winter amounts and Virginia has the lowest with about an inch of precipitation variation between months. There is more precipitation in March and less in October and November for every state in the region. June through August is a wet period for all states in the region.  This is due in part to heavy rainfall produced by summer thunderstorms.  Also, all of these areas are affected by at least one tropical system almost every year. Figure D. Annual snowfall amounts in the southeast US.

Figure D shows the annual snowfall of the Southeast.  Though this region isn’t typically associated with snowfall, it happens more frequently than most people realize.  Every state except Florida has at least a tenth of an inch average annual snowfall, with the averages rapidly increasing through North Carolina and Virginia.  The non-mountain areas of North Carolina have an average of 4-5 inches of snowfall annually.  In the northern parts of Virginia annual snowfall totals reach the 20 inch range.  Most of the snowfall, if it does occur, falls in the months of January and February, so the Southeast has a very slim chance of having a white Christmas.  Figure E shows that starting in the northwestern half of North Carolina, there is a nearly 100% chance of snow annually.  In northern GA and AL and in most of SC there is a fairly high likelihood of snowfall in a given year, even though the total amount can be very low.

Figure E. Chance of measurable snow in the southeast US (%). Figure F. Average number of days with frozen precipitation in the southeast US.

Many areas in the Southeast are impacted by thunderstorms during the summer, but since all of the states border the Gulf of Mexico or the Atlantic Ocean, they are also vulnerable to tropical storms and hurricanes. The tropical storms and hurricanes provide a substantial amount of rainfall to areas across the Southeast, and in some regions, they make up close to 40-50% of the rainfall they receive each year!

The precipitation during the winter season can vary depending on the location. Precipitation amounts are  less for most states (except Virginia) during the winter than during the summer as the moist flow from the Gulf of Mexico is cut off. However, a number of areas have precipitation equally distributed throughout the year due to the combined influences of winter frontals and summer tropical activity.  Additionally, every state except Florida reports some amount of snowfall on average during the winter, but the more northward you are, the better the chance to receive measurable snowfall. Elevation also becomes important when considering snowfall. Some places in the Appalachian Mountains report several feet of snow per year for an average winter while places in the foothills or valleys of those mountains report under a foot of snow.  Even in all-rain events, however, the mountains typically see more rain than flatter areas due to the uplift created by humid air blowing up the mountains and the subsequent condensation of water vapor into clouds and rain. 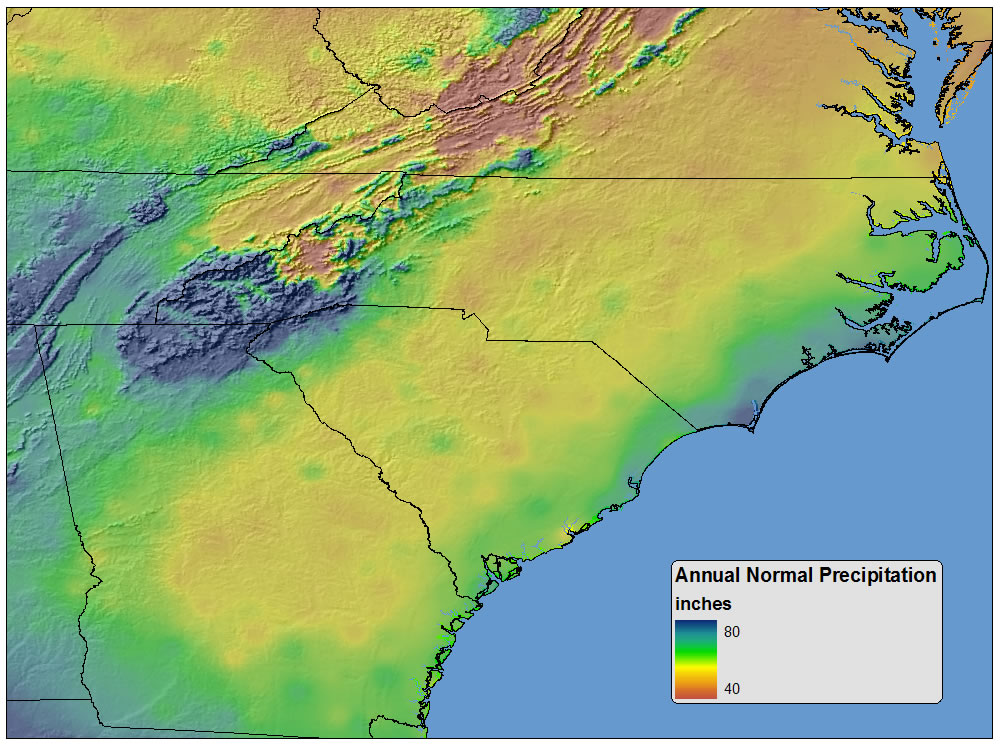