The Pacific/North American Pattern describes a change from normal in surface temperature and precipitation patterns across the United States.

Why do I care?  For the Southeast United States, the Pacific/North American Pattern brings changes in the temperature and precipitation patterns during the winter season. This could have a huge impact on crop production and the growing season.

I should already be familiar with: Isobars and Isotherms, Jet Streams, Air Masses, Semi-permanent highs and lows

The Pacific/North American Pattern, or PNA, describes the variation of atmospheric circulation patterns over the Pacific Ocean and North America. Like other atmospheric circulations, the PNA has the most impact on climate variables during the winter. There are two phases of the PNA, a positive phase and a negative phase. The positive phase usually relates to El Niño and the negative phase to La Niña, however there is a weak connection between the PNA and ENSO.

The Pacific/North American Pattern involves changes in atmospheric pressure between the Aleutian Low and the high pressure over the Rocky Mountains. 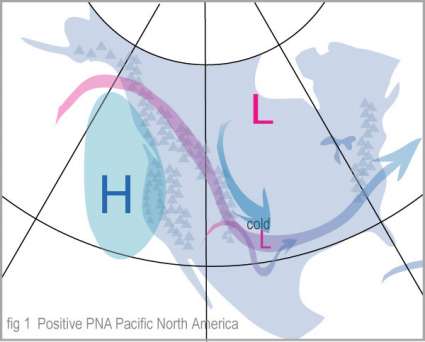 During the positive phase of the PNA, the Aleutian low in the Gulf of Alaska strengthens and the high pressure ridge over the Rocky Mountains also strengthens. This is similar to the strong phase of the North Atlantic Oscillation and increases the pressure gradient between the two centers of circulation.  This causes an increase in wind speed which steers more storms into the Pacific Northwest.

The positive phase of the PNA leads to above average temperatures in the western United States. These above-average temperatures are because of the upper-level ridge  over the Rocky Mountains. (Recall that surface high pressure areas are located within ridges and are accompanied by sinking air and clear skies.)  This ridge is stronger than under normal conditions, increasing the temperatures at the surface and preventing the development of thunderstorms over the mountains which could provide rainfall or snow. The winds off the Pacific are pushed northward because the ridge is blocking the air from continuing the normal track from the west. When this happens, the southwestern United States sometimes experiences drought conditions with decreased precipitation totals due to the blocked flow.

Also during the positive phase of the PNA, deepening troughs of low pressure exists over the Northern Pacific Ocean and the Southeastern United States. These troughs help bring colder air down farther into the South from the northern latitudes, increasing the winter storm activity for these regions. This helps cause below average temperatures across the south-central and southeastern US and above average precipitation in these areas as well. The deepening trough over the eastern US shifts the jet stream and the storm tracks farther south. This causes below average precipitation to fall throughout the Ohio Valley and the Mississippi Valley down into the northern part of the southeastern states. 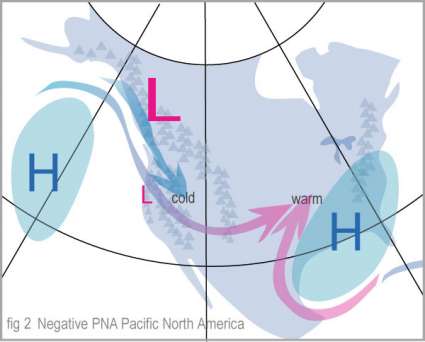 The negative phase of the PNA is essentially the reverse pattern of the positive phase. The upper-level ridge over the Rocky Mountains becomes weaker than normal during the negative phase corresponding to cooler than normal air. The Aleutian low also weakens, reducing the pressure gradient between the two circulation centers. This results in below average temperatures across the western US. Above normal precipitation is also likely for the western United States as winds off of the Pacific Ocean will bring storms farther south into this region.

Over the eastern United States, the upper-level trough is weaker than normal and warmer temperatures persist throughout this area. This shifts the jet stream and storm tracks northward into the Ohio Valley and the Mississippi Valley. This creates areas with above average precipitation in these valleys. Warm air masses from the Gulf of Mexico now have the potential to move farther north and cause temperatures to be above average in the states surrounding the Gulf. Above average precipitation will also be a factor in the northeastern United States with these below average temperatures. Florida and the southern parts of the southeast US, however, will be experiencing a dry spell during a negative phase in the winter months, accompanied with warm temperatures.