Why do I care? The average weather and climate conditions describe the expected weather you are likely to get.  Averages are calculated using long time periods and tend to smooth out the extremes of day-to-day weather.  Normals are specific 30-year averages adjusted for changes in station location, time of observation and other variations that can affect the measurements of climate.

I should already be familiar with: Temperature, Precipitation Types

When determining an average value, a month or year's worth of data (or longer) is retrieved for any given parameter and the arithmetic average is calculated by adding the values and dividing by the number of values involved.  A multi-year average can also be calculated by adding up all the individual years' averages and calculating one average that covers a long time period.  Then, later months and years can be described as being above or below the long-term (multi-year) average. 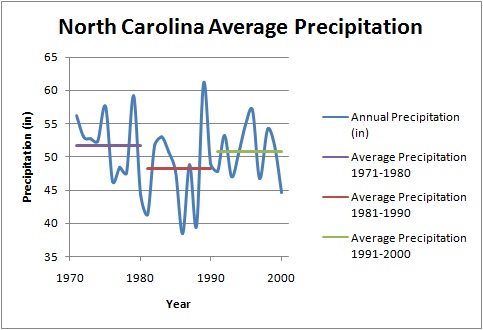 For precipitation, monthly and annual total rainfalls are averaged to create a long-term average amount of rain by month and year.  These can also be compared to the multi-year average to show how much above or below expected conditions a particular time period is.

Figure A shows how average precipitation can change over different periods of time. From 1971-80, the annual average precipitation in North Carolina is about 52 inches a year, whereas in 1981-90 the average was about 48 inches.  In 1991-2000 the ten-year average rose back to about 51 inches.   This decade by decade variation could be caused by a number of factors, including changing ocean temperatures, regional droughts, and the passage of tropical storms through the state in certain years.  The exact averages depend on the years that are chosen to use for the averaging period.  These changes become important when normals are calculated. 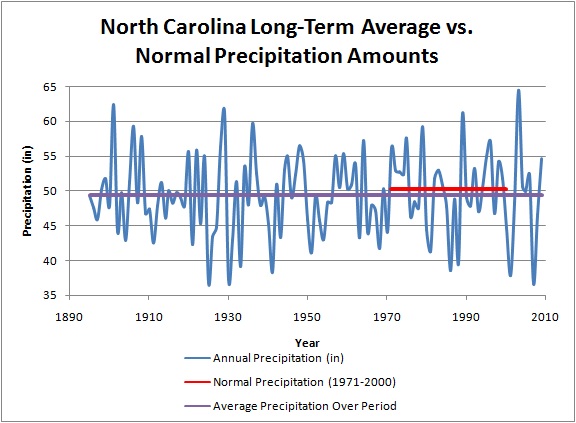 A "normal" value is usually taken from the average of a parameter over a 30-year period. This value is updated and statistically adjusted every 10 years to account for changes in the record like stations that move from one location to another or change their type of instrument or time of observation.  They are published by NOAA (National Oceanic and Atmospheric Administration).  The next new set of normals for 1981-2010 will be published in 2011 or 2012 once all the adjustments have been done.