Nitrous oxide is the third most influential greenhouse gas.  It stays in the atmosphere for an estimated 115 years, so the 40% contribution from human activities adds up quickly.  The human contribution comes from sources like fertilizer and livestock and human and animal wastes.

Why do I care? Nitrous oxide is a highly influential greenhouse gas.  Only about 40% of the current output can be contributed to human activities, but that impact can’t be ignored.  Some activities such as using fertilizer and driving cars are anthropogenic sources. 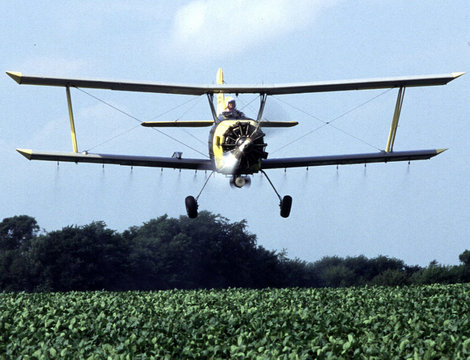 Figure A. Nitrous oxide fertilization of farmland by plane. (Image from Wikipedia).

Nitrous oxide, or laughing gas, is the third most influential greenhouse gas.  It is a molecule made up of two nitrogen and one oxygen atom.  Because of its chemical makeup, it is about 300 times more effective at warming than carbon dioxide.  From 650,000 years ago until the industrial revolution the concentration of N2O in the atmosphere was .00000027% or 270ppb.  The current concentration, as of 2009, is around .00000032% or 320ppb.  The increase in this greenhouse gas is less than most because human sources only account for 40% of the total output.  Anthropogenic sources include fertilized fields, fossil fuel combustion, livestock manure and human sewage.  Natural sources include the bacterial breakdown of nitrogen in soils and oceans.  N2O is estimated to stay in the atmosphere for around 115 years before it is removed.

Nitrous oxide combines with ozone in the atmosphere near the ground to make smog.  It is particularly common in cities with high automobile use and urban heating effects.