Mid-latitude cyclones are huge weather systems that form from a low pressure system and cover a wide area with precipitation.

Why do I care?  These cyclones can bring continuous precipitation for many days covering a large area of the US and during the winter, especially, wintry conditions can spread across much of the US with one storm system, even in the southern regions.

I should already be familiar with: Temperature Gradient, What Drives Weather, Semi-permanent Highs and Lows, Fronts, Isobars and Isotherms, Convergence and Divergence, Wind Shear, Convection

Mid-latitude cyclones are huge weather systems that occur most often during the winter season in the United States. These low pressure areas pop up easily during winter because of the large temperature difference between the equator and the North Pole. Mid-latitude cyclones can bring severe weather across the entire US with one system. Figure A is an image of a mid-latitude cyclone that occurred in 1993, which is called both the " '93 Superstorm" and the “Storm of the Century”.  This cyclone formed in mid-March and lasted for 4 days, bringing blizzard conditions to areas all along the East Coast. Mid-latitude cyclones are easily identified on satellite pictures by their “comma” appearance.

Mid-latitude cyclones form just as other low pressure systems do with the divergence of air high in the atmosphere. The jet stream plays a major role in the location of mid-latitude cyclones. The jet stream brings down colder air from the north into the southern regions of the United States. A front separates these two air masses. The low pressure system forms to the east of the upper-level trough of the jet stream. Air rises in low pressure systems because of the convergence of air at the surface and diverging air aloft which forms clouds. For the cyclone to intensify, the diverging air aloft has to be greater than the converging air at the surface. This essentially pulls more air upwards and the surface pressure of the system drops, intensifying the cyclone. Latent heat is also released within the clouds of the low pressure system.  This warms the air and causes instability which further intensifies the mid-latitude cyclone. Other factors that intensify the storm are vertical wind shear and convection. A high pressure area usually forms within the ridge that is to the west of the upper-level trough. The sinking air over the high pressure system allows a circulation of air throughout the vertical structure of the high and low pressure systems. This deepens the upper-level trough, which increases the winds both aloft and at the surface.

Locations more prone to mid-latitude cyclone development are the Gulf of Mexico, off the East Coast, and the eastern side of the Rocky Mountains. The first two locations mentioned allow moist air off of the water to ride up over the colder air over the land because of the counter-clockwise movement of the wind around low pressure systems. 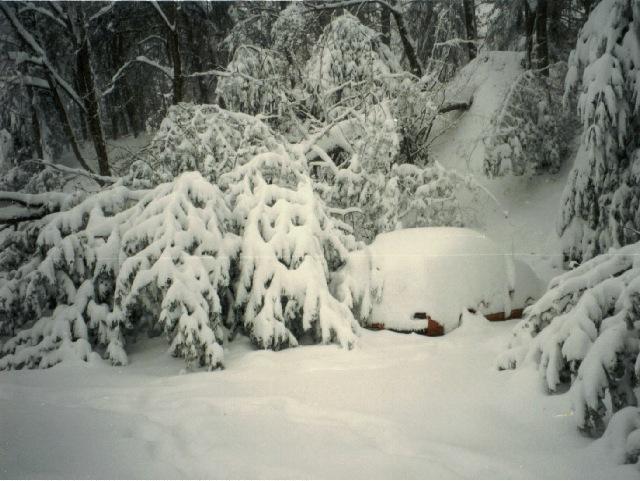 Figure B. "Storm of the Century" blizzard conditions in Asheville, NC. (Image from NOAA).

It is possible for mid-latitude cyclones to bring winter weather to areas as far south as Florida depending on where the storm develops. Mid-latitude cyclones usually track in a northeast direction up the East Coast of the United States dumping heavy amounts of precipitation to the Southeast and New England states. This track allows continuous moisture to  feed in from the ocean and enhance the precipitation in the cyclone.

Figure B shows the aftermath of a blizzard that occurred from the March 1993 Mid-Latitude Cyclone. The snow has added extra weight to the tree limbs and they have given way and sunk down to the ground. A car is seen under a blanket of snow at tree level.

Nor’easters and blizzards are results of these types of cyclones. As the mid-latitude cyclone intensifies, the precipitation patterns cover a larger area. The picture at the top of the page shows the area of cloud cover. Under these conditions, continuous precipitation occurs over large regions in a short period of time, crippling cities. If the low pressure system slows down and lingers over an area for an extended period of time, enormous amounts of precipitation can fall, burying cities in snow. The overabundance of precipitation, mostly snow, over a short period of time can collapse buildings and bridges and crack tree branches and power lines because of the added weight. This can be a problem in the Southeast especially because roofs on buildings are not designed to deal with the extra weight from snow. This combined with strong winds around the storm can bring about blizzard-like conditions. Sometimes the winds can be as strong as hurricane-force winds and storm surges from the mid-latitude cyclone can wreak havoc along the coasts. The combination of the winds, the amount of precipitation, and the drop in temperature are deadly ingredients for anyone caught outside in a mid-latitude cyclone.