Lifting mechanisms are forms of lift that cause air to rise. In this topic we cover orographic lift, frontal lift, convergence, and convective lift.

Why do I care?  Lifting mechanisms are important for the formation of clouds and rain (in combination with moisture and instability).

I should already be familiar with: Fronts, Stability, Convergence and Divergence, Convection

Air can move vertically for several reasons covered below.  The upward motion of air can lead to the formation of clouds and precipitation if there is sufficient moisture to reach condensation as the air cools while moving up.  In stable conditions, the vertical movement of air will be smooth and is not likely to cause deep convection like thunderstorms.  However, if unstable air is lifted through one of the mechanisms below, it can cause the explosive development of thunderstorms and flooding rains.

Orographic lift in the Southeast occurs mainly along the Appalachian Mountains. When air moves across the Ohio and Tennessee valleys, it encounters the Appalachian Mountains. Since the air has nowhere to go but up, it is forced up the side of the mountains. As the air rises, it begins to cool and condense, and depending on how moist the air mass is, showers or thunderstorms could form. After the air passes across the mountain range, it will begin to sink and dry out, and in some cases greatly warm the surrounding air. Many times during the Spring and Fall, squall lines or severe weather systems will cross the Appalachian Mountains and weaken significantly. The Appalachians in a sense act as a barrier against strong storm systems that head toward the Southeast from the central United States.  In Georgia and Alabama at the south end of the Appalachians, winds from the south are most likely to cause clouds and rain as the air rises over the southern end of the mountains, and the mountainous areas of these states have the highest annual rainfall because of orographically-induced rain.

As mentioned in previous topics, fronts on weather maps represent the leading edge of either warm or cold air. Both kinds of fronts can provide lift for rain showers and thunderstorms, but they do not have the same characteristics as discussed below.

Cold air is more dense than warm air, and as a result, it undercuts and pushes the warm air vertically ahead of it as it moves. The slope of the cold air with a cold front is very steep, so the air is rapidly pushed up and can sometimes result in strong to severe thunderstorms if ample moisture and instability are available.

Figure D. Converging of air at the surface.

In the center of low pressure areas, winds converge toward the center of the low due to the effects of friction.  Since the air cannot go down into the earth, it must rise up.  This lift due to convergence leads to the presence of clouds and precipitation near low pressure centers.  The stronger the convergence, the stronger the vertical motion and the more clouds and precipitation are likely to form.

When the sun heats the ground, the warmed air at the surface will rise under the influence of convection.  The rising thermals are similar to the hot bubbles of water that rise from the bottom of a boiling pot.  If the air is stable, then the bubbles of warm air will form scattered fair weather cumulus clouds and not much else.  If the air is unstable, then the lifting from convection will lead to rapid growth of clouds into deep cumulonimbus clouds, or thunderstorms.  The higher the surface temperatures, the more convection can occur.

Precipitation in the Southeast is influenced by a variety of lifting mechanisms. In parts of Virginia, North Carolina, South Carolina, and Georgia, orographic lift provides rain for the windward slopes of the Appalachian Mountains. Lake Toxaway, one of the rainiest regions in North Carolina, has an annual average of 80+ inches of rain for a given year due to orographic lift. The prevailing winds in that region are mostly from the south and west, and Lake Toxaway is on the windward side of the Appalachian mountains, making orographic lift an effective precipitation mechanism. 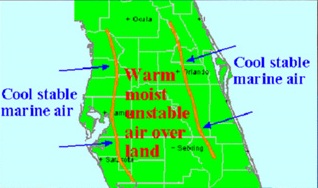 A classic example of air converging and forming rain showers and thunderstorms is the sea breeze in Florida. During the summer, sea breezes will often form on the west and east sides of Florida. due to differences in temperature between the land (which heats quickly) and the ocean (which heats up more slowly) as seen in Figure E. As the two sea breezes move landward on the Florida peninsula, they collide with each other, and the air is forced to move upward. Wherever the two sea breezes collide, there is often intense rainfall and thunderstorms, and this provides much of the summer rain for many parts of Florida.