Why do I care? The climate is changing in the Southeast, and if you live there, these changes will affect you.  However, computer models vary in exactly how and when these changes will occur.  For example, average rainfall amounts could increase or decrease and the seasonal patterns and timing of precipitation may change.

I should already be familiar with:  Global Warming vs. Climate Change 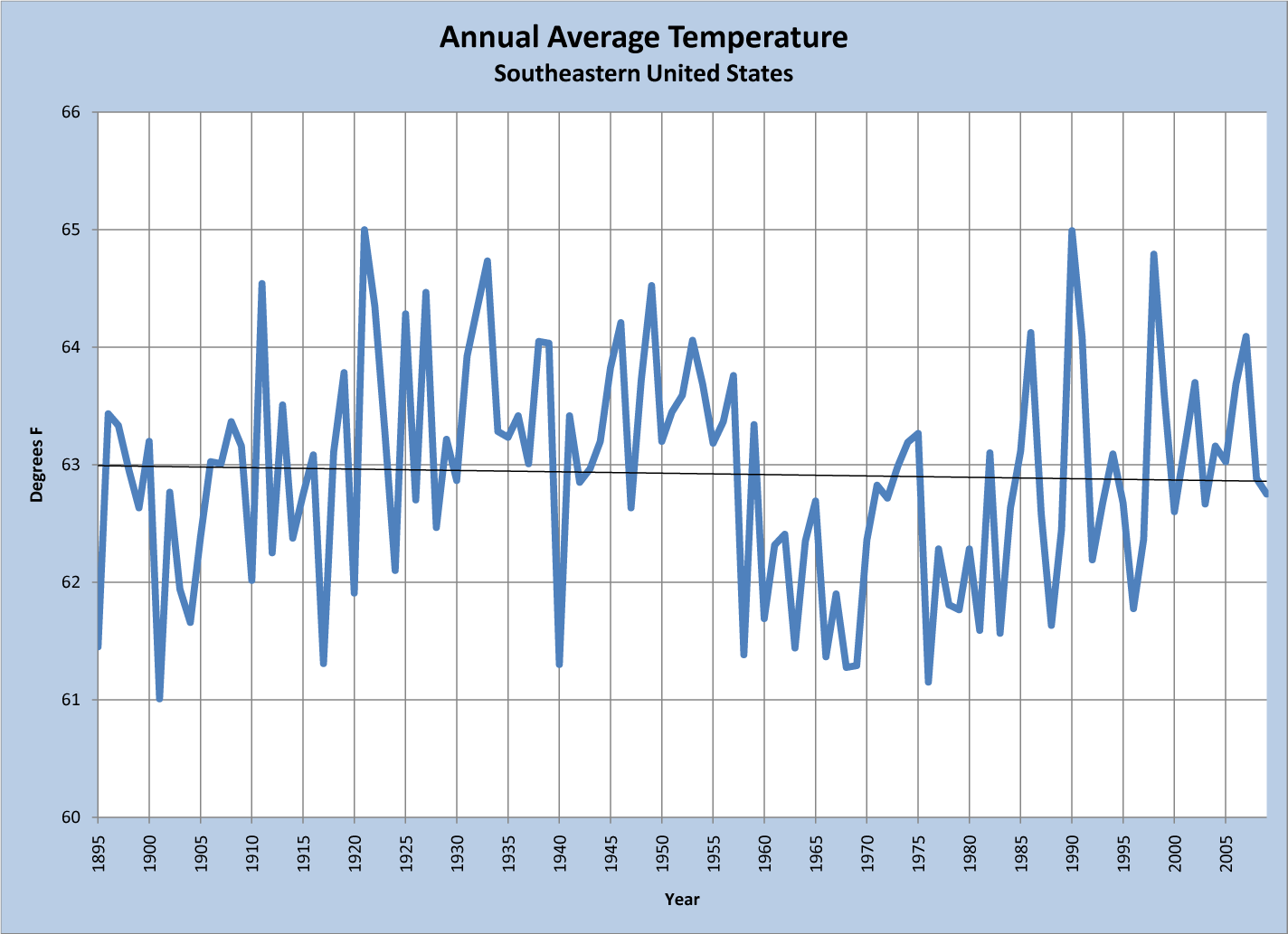 Although annual average temperatures across much of the United States are expected to increase in the future, over the past 100 years annual average temperatures in the Southeast have decreased slightly as shown in Figure A. This cooling has been attributed partially to changes in land use over time from bare fields of cotton and row crops in the early 20th century to the present forest stands, which are cooler and moister than open fields.

Over the last 40 years, however, temperatures have increased throughout much of the Southeast.  This is true even in rural areas away from cities and suburbs which are becoming more urban in nature over time.  Winters are becoming milder, but the summers are also becoming more sweltering.  In parts of the Southeast, like northern Georgia, there are 20 fewer days below freezing each year than there were 40 years ago.  The number of days above 90°F is expected to almost triple over the next 100 years.  This could cause heat stress not only for humans, but animals and crops as well. 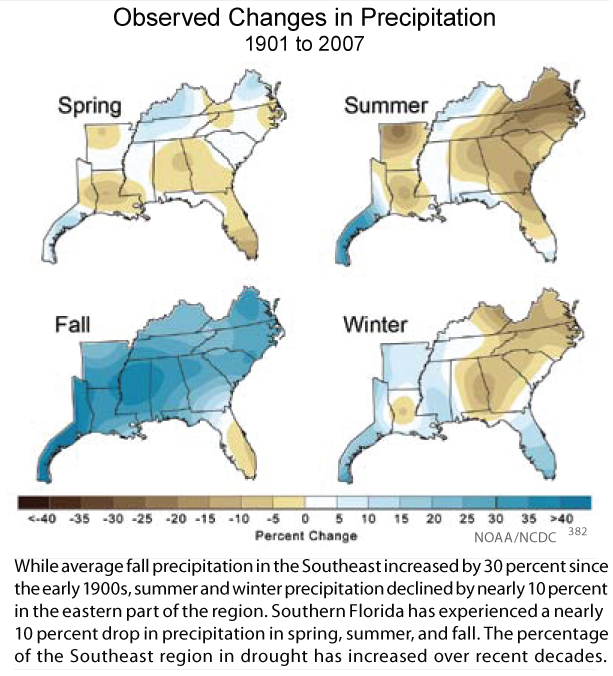 Figure B. Map of changes in precipitation by season.

Generally, for everyone outside of Florida fall is becoming wetter and all other seasons are the same or becoming drier.  Annual average rainfall in many locations is nearly constant, but the rains  have been falling in more intense and short-lived episodes, with longer dry spells in between.  In some locations rainfall is becoming heavier, but occurrences of drought have also increased by about 10% in the past 40 years.  Global climate models have a difficult time predicting whether the rainfall in the Southeast will increase or decrease in the next 100 years, however, because the physical processes that form clouds and rain in the computer models are highly variable and do not do a good job of simulating even the current rainfall well.  While water supply from reservoirs is likely to be adequate under good management practices and conservation efforts, more frequent droughts or large population increases will stress the ability of water utilities to meet everyone's needs. 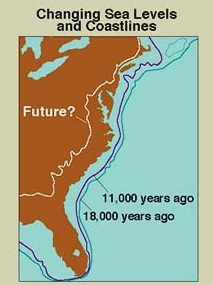 There is a potential for the sea level to rise by about two feet off the Southeast coast over the next one hundred years.  Not only could this flood low lying areas like barrier islands, but it could also increase the salinity in estuaries, wetlands and tidal rivers.  It could also increase vulnerability of coastal areas to the damaging effects of storm surge. Low lying areas that currently flood during heavy rains would likely flood more frequently, and others that don't currently flood may start to experience flooding.

There is some theory and scientific evidence that hurricanes will increase in intensity in the next hundred years.  This would mean more strong hurricanes (CAT3+), and storms that form would have stronger winds and the associated storm surge would be higher, pushing more water inland before and during the storm.  This coupled with sea level rise could spell catastrophe for some coastal communities in the Southeast.

Warmer temperatures would likely result in a change of the ecosystem. Plants that once grew in certain regions will now thrive farther north. Soil moisture could decrease under the higher temperatures and more intermittent rainfall, even if the total amount of rainfall increases. The growing season could increase in length, leading to longer growing periods.  Some crops could benefit from warmer temperatures  and increased carbon dioxide while others might not. Crops that are already near their temperature limits will be the most affected in terms of yield and quality if temperatures continue to rise. The crops that are not near their temperature thresholds would benefit from warmer temperatures, and would likely increase their yield and quality.  Freezes in Florida would be reduced, leading to decreased loss from cold weather, and citrus crops might be able to migrate north of their current range.

Because of the warmer temperature and potential drying of the soil, irrigation may need to be expanded, or else marginal lands will have to be taken out of production or switched to more suitable crops.  Pests could increase in range, necessitating the use of more pesticides.  Forests could also die back and change to a more open prairie.

All of these local changes will take place in the context of a world that is also changing in many ways.  Economic demands, health issues, coastal changes, energy needs and production methods, and population growth will also be varying in ways that are difficult to predict now.  All of these changes will affect the costs of agricultural production and the demand for your products in the future.

Some of the biggest climate change concerns for public health include rising temperatures, rising sea levels, and increasing intense precipitation events. Mid-latitude cities, such as those in North Carolina, tend to experience greater summer climate variability. These cities are also expected to experience the greatest increase in summertime heat-related deaths as a result of climate change.1 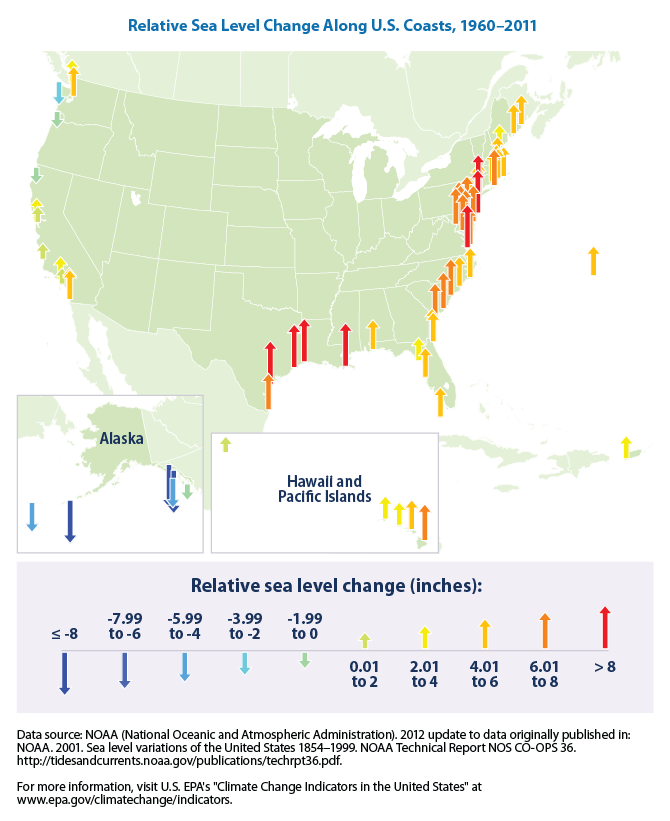 Rising temperatures may facilitate the melting of glaciers and ice caps in the ocean, contributing to rising sea levels. When coupled with more frequent storm surges, more frequent and intense flooding may result.8 These extreme weather events can reduce the availability of drinkable water, compromise the integrity of public health infrastructure, and cause direct death or injury in coastal communities.9,10The North Carolina coast is especially vulnerable to sea level rise, which has risen over a foot in the past 100 years, with large areas of land elevated only a small amount above sea level.11 A one-foot rise in sea levels is correlated with 200 feet of beach erosion in North and South Carolina.6