Semi-permanent highs and lows are persistent pressure systems that appear over an area during the year and affect how storms and weather systems enter the United States.

Why do I care?  Semi-permanent highs and lows are regions where high and low pressure areas persist throughout the year. The winds around these pressure systems can steer weather patterns throughout the US and bring different kinds of weather depending on where these pressure systems are located. The paths of winter weather systems and hurricanes are largely controlled by the location of these highs and lows.

I should already be familiar with: Convergence and Divergence, Pressure

Western Hemisphere semi-permanent highs and lows are atmospheric circulations located near North America that direct weather and climate patterns in the United States. There are similar semi-permanent pressure patterns located in the Eastern Hemisphere.  The placement of these pressure systems is tied to the location of continents, mountain ranges, and atmospheric jet streams.   They affect weather throughout the year by steering transitory low pressure areas (mid-latitude cyclones) towards the United States. These systems also direct weather patterns into the US such as hurricanes, ENSO (El Niño-Southern Oscillation), and winter weather.  They are considered semi-permanent because they are located in a generally constant geographic region, although they can shift their central location, grow or contract over time, and get stronger or weaker. 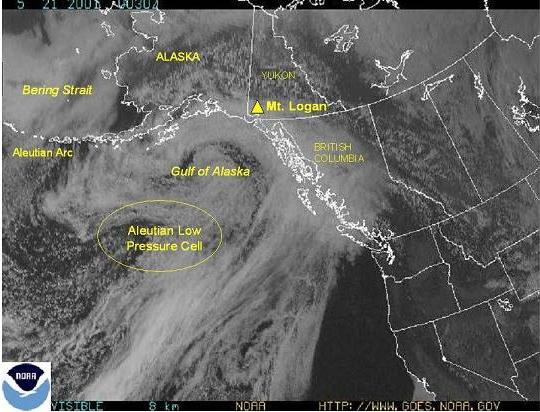 The Aleutian Low is a low pressure system located over the Gulf of Alaska and the Bering Sea. During winter, this is a zone of activity where numerous storms are located. Atmospheric disturbances often move into this area and intensify under the influence of the Aleutian Low. The circulation around the Aleutian Low then steers the storms into the Pacific Northwest, particularly during the winter months. During summer, the Aleutian Low is weak and often nearly nonexistent.

Figure A shows the approximate location of the Aleutian Low during the winter season and the formation of clouds around this pressure system. 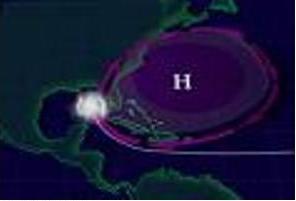 The Bermuda High is a high pressure system located in the Atlantic Ocean. During the summer, this pressure system is located just off the east coast of the United States. The clockwise circulation around this high pressure area  helps direct the path of hurricanes and helps determine where they will make landfall. The summer months along the East Coast are relatively wet and humid because the wind around the high blows moist air from the ocean inland. This explains the increased humidity throughout the summer months in the southeast US. During the winter months, the Bermuda High is located farther east of the US towards the middle of the Atlantic Ocean. This allows the jet stream to dip farther south into the southeast US, sometimes bringing wintry weather with it.

The winds around the Bermuda High also push the surface water of the Atlantic Ocean around.  This results in the strong Gulf Stream current off the East Coast, which flows northward along the western edge of the Atlantic Ocean, bringing warm water from the tropics to more northern locations.  The center of the Bermuda High is an area of light winds and little currents.  Sailing ships that were caught in the center of the Bermuda High often got stuck with no way out and sailors were forced to toss supplies and sometimes even stock animals overboard to lighten the ship enough to make headway out of the calm high pressure area.

Figure B shows the location of the Bermuda High during the 2005 Hurricane Season. This led the hurricane tracks into the Gulf of Mexico where devastating hurricanes made landfall such as Hurricane Katrina and Hurricane Rita.

The Pacific High is located off the west coast of North America. During the summer months, it is located just off the coast of California. Winds blow clockwise around a high pressure system. This keeps the western coast of the United States relatively dry during the summer especially compared to locations along the East Coast. During the winter, the Pacific High moves farther south. This allows winds to blow into the west coast and the polar front to move south into the United States. This brings storms into the coast making the winter season wet across the western United States.