Why do I care?  Latent heat released during any kind of storm increases instability in the atmosphere potentially causing severe weather. Sensible heat causes change in temperature due to contact with colder or warmer air of surfaces.

I should already be familiar with: Stability, Pressure, Density 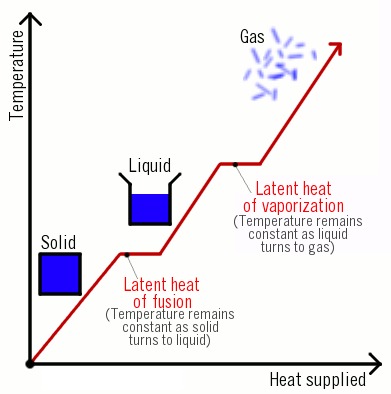 Latent heat is the energy absorbed by or released from a substance during a phase change from a gas to a liquid or a solid or vice versa.  If a substance is changing from a solid to a liquid, for example, the substance needs to absorb energy from the surrounding environment in order to spread out the molecules into a larger, more fluid volume.  If the substance is changing from something with lower density, like a gas, to a phase with higher density like a liquid, the substance gives off energy as the molecules come closer together and lose energy from motion and vibration.

For example, when water is boiled over a stove, energy is absorbed from the heating element and goes into expanding the water molecules into a gas, known as water vapor. When liquid water is put into ice cube trays and placed in the freezer, the water gives off energy as the water becomes solid ice.  This energy is removed by the freezer system to keep the freezer cold.

Water vapor is a greenhouse gas located in the atmosphere and a very important component for cloud formation. If the air is dry, or unsaturated, clouds are not likely to form because there is minimal water vapor in the air. If the air is moist, or saturated, the water vapor will condense to form clouds. When these gas molecules condense into liquid drops, latent heat is released into the atmosphere which warms the air surrounding the molecule. This helps to add instability in the atmosphere and this warm air surrounding the molecule will want to rise. Warm air is less dense than cold air because molecules in warm air move around much faster and move further apart.

Latent Heat in Thunderstorms and Hurricanes 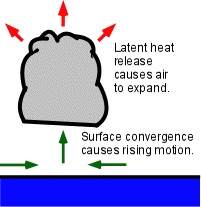 Figure B. Latent heat in a thunderstorm (Image courtesy of University of Illinois)

Latent heat plays a very important role in thunderstorms and hurricanes. Clouds form when warm air rises and the water vapor it contains condenses onto particles called cloud condensation nuclei.  At that point the air becomes saturated. When this air first begins to rise, the water vapor is in the gaseous phase. When the water vapor condenses to form clouds, it releases latent heat into the atmosphere. The latent heat then warms the surrounding air around the new cloud droplet causing instability. The warm air around the cloud droplet will now want to rise and condense. This increases the cloud height and depending on how unstable the atmosphere is, thunderstorms could form from these growing clouds. Thunderstorms release enormous amounts of latent heat which adds to the instability in the atmosphere causing some thunderstorms to become severe. In hurricanes, latent heat is released within the clouds of the hurricane, warming the air inside the clouds. Hurricanes feed off of this latent heat release because it causes instability within the cloud and this warm air will want to rise. The storm will then intensify, or gain strength.

Sensible heat is the energy required to change the temperature of a substance with no phase change. The temperature change can come from the absorption of sunlight by the soil or the air itself.  Or it can come from contact with the warmer air caused by release of latent heat (by direct conduction).  Energy moves through the atmosphere using both latent and sensible heat acting on the atmosphere to drive the movement of air molecules which create wind and vertical motions. 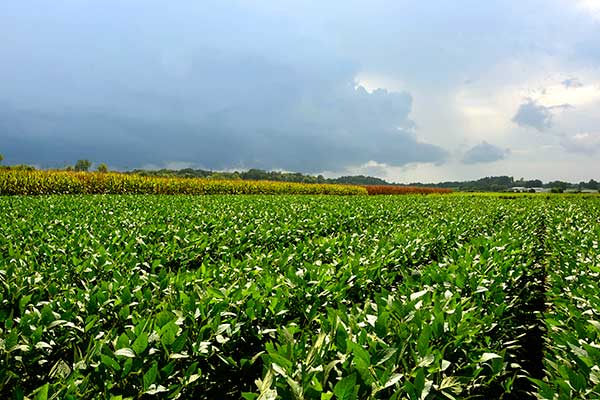 Figure C. Thunderstorm over a field of soybeans and corn (Image courtesy of agfax.com)

On a day with a lot of water vapor in the air (high humidity) the potential for latent heat release makes it more likely for convective showers and thunderstorms to develop.  This is part of the reason that thunderstorms can pop up around the Southeast on warm and humid summer days even when there are no fronts in the area.  Rain that falls from these storms hits the hot ground and evaporates, which removes a lot of energy from the ground and cools it off.   If you are going to apply an herbicide or pesticide which needs to sit on the leaves of your crops for a while to work, then you may have problems on days when the high humidity is more likely to lead to the development of showers.  On the other hand, the cooling effect of the rain may feel refreshing on a hot summer afternoon.

Evaporation of sweat in humans and animals also leads to cooling of the skin surface on hot days.  Evaporation is more effective when there is some wind to carry the moisture away from the skin area.  However, in really hot conditions the body may shut down and stop producing sweat.  This is particularly true when you are in areas exposed to sunlight, which will increase your temperature due to the sensible heat released by absorbing the solar radiation on your skin.  In that case, the body's temperature can rise very quickly and cause heat stroke, which can lead to death.  That is why you need to keep hydrated and take frequent breaks in the shade while working outdoors on the hottest days and seek medical help immediately if you stop sweating in hot conditions.

Tropical Cyclones, Life Cycle of a Thunderstorm, How Clouds Form