The "greenhouse effect" is the effect of atmospheric gases like carbon dioxide absorbing energy from the sun and earth and "trapping" it near the Earth's surface, warming the Earth to a temperature range that is hospitable for life.

Why do I care? Without the greenhouse effect, the earth would be much cooler than it is now and life would be difficult.  However, too much greenhouse warming could raise global temperatures to a level that is significantly different than the current climate.

I should already be familiar with: Earth's Energy Balance, Radiation, Longwave and Shortwave Radiation 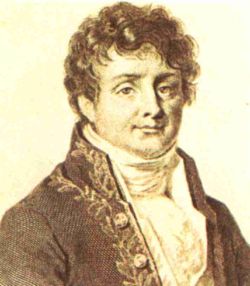 The "greenhouse effect" is not the same as global warming. "Global warming" refers to the increase in global average temperature due to excessive amounts of greenhouse gases. The greenhouse effect describes a critical function of our atmosphere: to keep the earth warm enough to sustain life.

The greenhouse gases in the atmosphere allow the sun’s short wavelength radiation in, and because of the chemical properties of the gases, they do not interact with sunlight.  But they do absorb the longwave radiation from the earth and emit it back into the atmosphere, different from a greenhouse which does not allow the longwave radiation to escape through the glass. The increase in trapped energy leads to higher temperatures at the earth's surface. This has caused some people to rename the process ‘the atmospheric greenhouse effect’ or just ‘the greenhouse effect’. 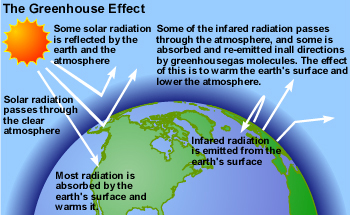 The most abundant greenhouse gases responsible for the greenhouse effect in the atmosphere are water vapor, carbon dioxide, methane, nitrous oxide, and ozone. These greenhouse gases keep the surface of the Earth approximately 60F warmer than we would expect without these gases present.

If the Earth's greenhouse gases increased in concentration and nothing else in the atmosphere changed, then the surface temperature would be expected to rise. The amount of radiation directed back down to Earth would increase and that would heat up the surface as the world's energy balance adjusted to the new conditions. However, the Earth has a very complicated climate system and if this increase in energy occurred, other things like increased evaporation and cloud formation as well as melting of polar ice would be likely to occur and interact in unexpected ways that would further change regional as well as global temperature and climate.

Below is a video from the National Academies of Science explaining how the greenhouse effect keeps our planet warmer with the greenhouse gases than we would be otherwise.

Description: This activity will assist students in understanding the importance of forests on the carbon dioxide level and the amount of carbon that the trees are able to store. Useful mainly for an AP Environmental Science class.