Frosts form when temperatures are near or below freezing and relative humidity values approach 100% near the ground.  A freeze occurs when the temperature is at or below 32oF throughout the area.  In a freeze, surface temperatures can drop to below 28 degrees, which is the threshold for killing damage for many plants.

Why do I care?  Frosts and freezes have big impacts on farmers and growers.  Frosts can cause cosmetic damage and destroy tender vegetation.  Freezes cause widespread plant damage and end the growing season for most plants.  Because of this, there are several frost/freeze prevention methods used by farmers to protect their crops.

What’s the difference between a frost and a freeze?

Although people use frost and freeze interchangeably, they actually mean two different things. The National Weather Service issues frost advisories and freeze warnings during the growing season if they expect temperatures to dip around or below freezing. When they issue a frost advisory, air temperatures are typically above freezing but frost is possible at the ground, especially when the humidity is high. This can be hazardous to tender vegetation that is sensitive to frost. When the National Weather Service issues a freeze warning, temperatures are expected to fall below 32oF for the region, ending the growing season for most plants by destroying the leaf structure of the plants as the water inside the leaves freezes and expands.

What kinds of conditions are needed for frosts and freezes?

Typical conditions needed for frost are clear skies and very light winds (this kind of frost is called radiation frost) as any heat at the earth’s surface can re-radiate back to space, allowing optimal surface cooling. During a radiation frost, temperatures above the surface are typically warmer than the temperature of the air at the surface, leading to what we call an "inversion." The inversion is not very deep, however, as it can range from 30-200 feet. If the temperature at the earth’s surface is the same as the dew point and they are both below freezing, frost will form. If the air is dry, it is possible to have temperatures below freezing and not have frost. The most common kind of freeze that occurs is an advection freeze. An advection freeze is caused by cold air moving from one region to another. Unlike radiation freeze events, advection freezes typically have some wind (sometimes strong wind) and there can be clouds in the sky.  However, freezes can also occur in clear, calm conditions when the temperature drops sufficiently after sunset across a wide area.

Are there ways to prevent frost/freeze damage to crops? 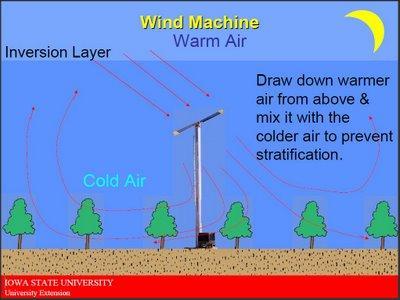 Although frost and freeze damage to crop plants can be negative and irreversible, there are some measures which can be taken in order to protect high-value crops.  While there is not one solution that is guaranteed to protect crops, farmers have developed ways to increase the chance of plants not getting harmed by cold weather. Below is a list of popular methods used by farmers.

As the name implies, heaters can create heat and raise the temperature in the surrounding area. Most heaters are designed to run on oil for fuel, and due to the rising costs of oil, many farmers have looked for other alternatives. Heaters work well in both radiation fog and advection freeze conditions.

These work extremely well during radiation fog events. As mentioned earlier, during radiation fog, an inversion forms where temperatures increase with height. When a fan is used in this event, it mixes the air at the surface with the air above, and temperatures at the surface become warmer as the warm air above is pulled down. If a hard freeze or frost is expected that night (temperatures below 28 degrees F), heaters can be used in combination with fans to create a warmer environment. However, in the event of an advection freeze, fans typically are not beneficial. The wind is blowing during an advection freeze and there is no inversion to mix. Occasionally helicopters are used to keep the air mixed in order to save the crop if the inversion layer is present. Wind machines and helicopters can be very expensive to use in the event of a freeze warning, but saving the overall crop is worthwhile in the end, especially if the grower owns thousands of acres of land. Hundreds of thousands of dollars can be lost due to freezes.

Although this method can be dangerous to use, it actually can work well if used properly. Compared to using wind machines and oil heaters, irrigation is a much cheaper method to use. When water freezes and turns into ice, it releases latent heat. Then, the ice that builds up on the plant will insulate it from the colder surrounding air temperatures. Because of this, some growers choose to spray their crop with water before the freeze occurs. 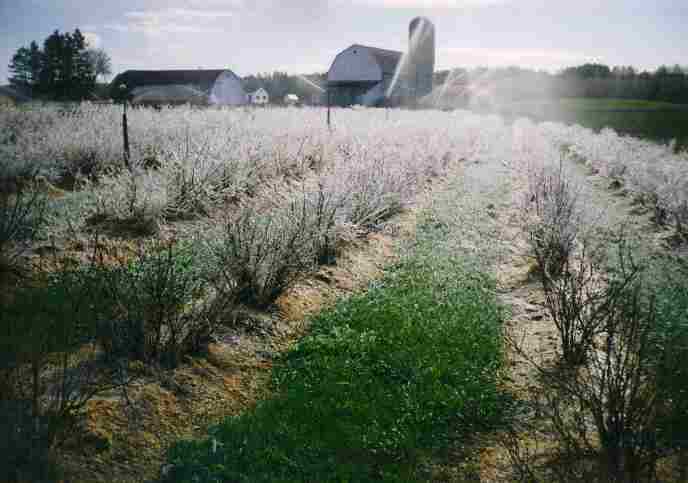 There are some problems with the irrigation method. Usually, farmers use sprinklers to spray water on their plants and crops. If too little water is applied, there won’t be enough heat released by water to keep plants protected. If too much water is applied, then the soil becomes waterlogged and can hurt the plant's roots. Additionally, if too much water freezes on the plant, the weight of ice can snap or break limbs. The solution to this is to use automated sprinklers that water periodically throughout the night.

Farmers in Florida used the irrigation method to protect their crops from a hard freeze in 2002. Temperatures near Tampa, Florida, dropped down to 28 degrees for three straight hours before rising again. The irrigation method kept the plants insulated during the coldest hours of the night, and although there was minor damage to smaller plants and blossoms, no major extensive damage was reported.

Many Southeastern growers will remember the “Easter Freeze of 2007.”  This was one of the latest recorded weather events that resulted in a hard freeze where temperatures dropped into the low 20oF range in the Piedmont area of North Carolina.  This freeze severely injured ornamental trees and shrubs, as well as many fruit-bearing plants.  It was particularly bad because it came during the peak blooming season for many fruit crops, destroying the potential for developing fruit.

Most of the apple, blueberry and peach crops were severely damaged and yielded very little in 2007.  Many blueberry growers had little to sell due to the loss of the fruit-bearing blossoms.  Many NC growers also claimed a complete loss of their peach crop.  Muscadine grapes were also severely damaged by the cold weather, especially the variety “Carlos”.  In mountainous regions, there was little damage to vines or buds because the plants had not come out of dormancy yet.  However, vines in the Piedmont and coastal plain areas were more severely damaged.  Not only was there damage to the fruit, but also to vines, as evidenced by long cracks in the outermost layer of tissue.  This is because those plants had already set buds, and early fruit was damaged by the cold weather.  Overall yield losses in this particular variety of Muscadine grapes as a result of the Easter freeze were greater than 50%. The use of row covers spared most strawberry growers any damaging losses in the Easter Freeze. 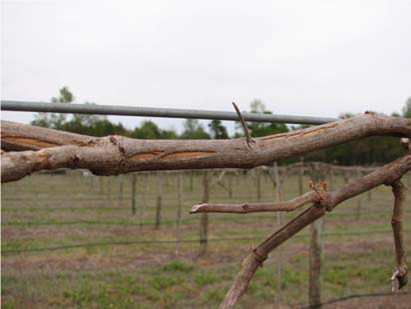 The nursery industry was also subject to severe losses in the Easter Freeze of 2007.  The nursery industry is very important to the agricultural economy of the Southeast, and the USDA Farm Service Agency estimated that there were 58 million dollars lost in that one freeze event alone.  The damage included lost flowers and buds to ornamental plants, dieback to limbs and leaves, as well as complete death in some cases.  Freezing temperatures were compounded by the unusually warm weather (80-85oF) and limited rainfall which occurred just one week prior to the event.  Plants had already started to come out of winter dormancy, but were feeling the effects of warm and dry conditions and were experiencing some wilting.

Many homeowners also reported that well-established trees died as a result of this cold stress, and trees such as crape myrtles had severe dieback on new branches due to cold injury.

Some row crop growers were even impacted by the Easter Freeze of 2007.  Wheat planted the previous fall was sometimes damaged, and the heads of wheat turned white and died.  In addition, some growers had planted corn the week before the freeze.  The corn had just germinated, and the cold damaged the emerging seedling.  In these cases, it was important to get out and scout fields to ascertain damage that was sustained on a case-by-case situation.

Vegetation: Its Role in Weather and Climate, Watches and Warnings