Evapotranspiration is the process of evaporating water from leaves through plant transpiration during photosynthesis.  It varies because of a multitude of factors like wind, temperature, humidity, and water availability.

Why do I care? Evapotranspiration is a main component of the water cycle and is important in crop maintenance.

I should already be familiar with: The Water Cycle, Humidity, Temperature, Pressure, Density 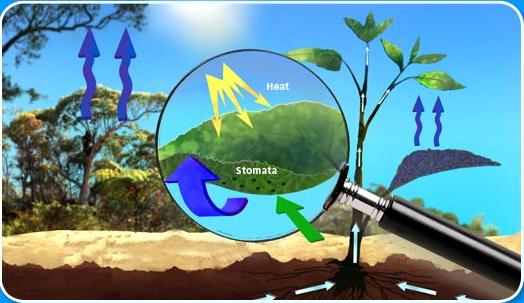 Figure A: Water Vapor Release From Plants Due to Energy From the Sun (Image from www.shoalwater.nsw.gov.au)

The evaporation in evapotranspiration refers to water evaporated from over land.  This includes evaporation from soil, wetlands, and standing water from places like roofs and puddles.  It can also refer to direct evaporation of liquid water from the leaf surface of the plant.

Transpiration happens when plants release water vapor from tiny holes, called stomata, in their leaves.  This is caused in part by the chemical and biological changes that occur as the plant undergoes photosynthesis and converts carbon dioxide into oxygen.  Transpiration performs the same function as a human sweating because plants do it to cool down their leaves. Figure A shows the stomata on the underside of the leaf releasing water vapor (blue arrow) because of the warmth from the sun.

There are a whole host of factors that affect evapotranspiration:

Humidity – If the air around the plant is too humid, the transpiration and evaporation rates drop.  It’s the same reason sweat does not evaporate from our skin when it’s too humid.

Water availability – If the soil is dry and there is no standing water, there will be no evaporation.  If plants can’t get enough water, they will conserve it instead of transpiring by closing their stoma.

Soil type – Soil type determines how much water the soil can hold and how easy it is for the water to be drawn out of it, either by a plant or by evaporation.  For areas where the ground is covered by vegetation, the rate of transpiration is considerably higher than the rate of evaporation from the soil. 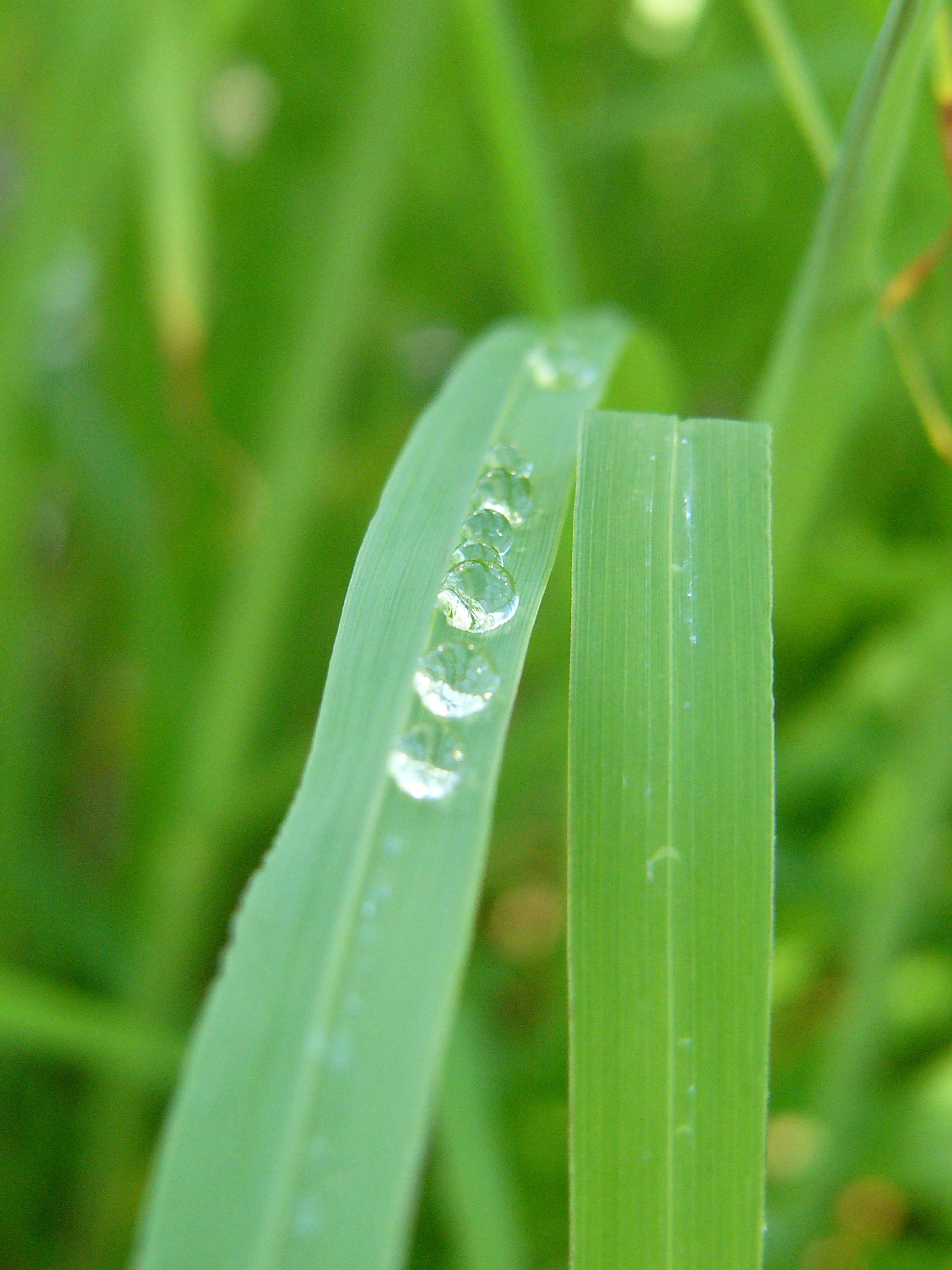 Figure B. Water drops on dallisgrass (Image from Bridget Lassiter)

If you can predict evapotranspiration rates, you will be able to estimate the water demands of the crop.  This may help you to determine whether or not to irrigate, for example.  If crops do not receive enough water, their leaves may curl and their production decline as the plants fight to conserve what water they can.  Knowledge of predicted temperature and wind conditions from weather forecasts can give you a clue to how strong the evapotranspiration rates will be.

Evaporation may also directly affect soil moisture conditions.  If there is too much moisture in the soil, the farm machinery can get bogged down because it has to work too hard.  The weight of the machinery can also compact the wet soil, leading to lack of air for healthy root systems to develop.  If the soil is too dry, however, the plants may be easily stressed due to the lack of available water and a crust may sometimes form on top of the soil.  This crust may be so impermeable that when it rains on top of the crusty soil, the rain runs right off rather than soaking in.

7th grade science: 7.E.1.2 : Explain how the cycling of water in and out of the atmosphere and atmospheric conditions relate to the weather patterns on earth.