Earth's Energy balance describes how the incoming energy from the sun is used and returned to space.  If incoming and outgoing energy are in balance, the earth's temperature remains constant.

Why do I care? The energy balance drives the weather and life on earth.

I should already be familiar with: Conduction, Radiation, Convection, Albedo, Longwave and Shortwave Radiation

Essentially 100% of the energy that fuels the earth comes from the sun.  To maintain a constant global average temperature, all of the sun’s radiation that enters Earth’s atmosphere must eventually be sent back to space.  This is achieved through Earth’s energy balance.  Figure A depicts how the energy from the sun is absorbed, reflected, and emitted by the earth. 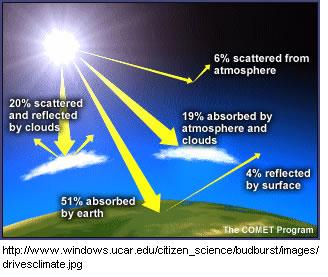 100% of the energy entering earth’s atmosphere comes from the sun.

~50% of the incoming energy is absorbed by the earth’s surface i.e. the land and oceans.

~30% is directly reflected back to space by clouds, the earth’s surface and different gases and particles in the atmosphere (the earth's albedo is 0.3 on average).

~20% is absorbed by the atmosphere and clouds.

The 70% of the sun’s energy that is absorbed by the earth’s surface, clouds, and atmosphere causes warming.  Any object or gas that has a temperature emits radiation outward, and this is ultimately re-radiated back into space.  This occurs 24 hours a day, and the energy is emitted as longwave radiation due to the characteristic temperatures of the earth and atmosphere.

Consider a stove, for example.  If you were cooking, you’d have the burner turned on so it would heat up.  The burner is like the earth and the heat source, be it gas or electric, is like the sun.  When you’re done cooking you turn off the burner, but it stays hot for a long while even after the heat source is gone.  Turning off the burner is like the sun going down.  Even though there is no more energy input, there is still energy output in the form of infrared radiation.  The burner stays hot because it’s still emitting the energy it absorbed earlier, just like the earth.  This time delay is sometimes called "thermal inertia."

Most of the energy emitted from the earth’s surface does not go directly out to space.  This emitted energy is reabsorbed by clouds and by the gases in the atmosphere.  Some of it gets redistributed by convection.  Even more energy is released into the atmosphere through condensation.  The majority of the energy is reabsorbed by the greenhouse gases such as methane, nitrous oxide, ozone, carbon dioxide and water vapor.  These gases constantly emit the sun’s energy back into the atmosphere and keep the earth a habitable temperature.  Eventually, most of the energy makes its way back out to space and Earth’s energy balance is fairly well maintained.  The energy that doesn’t make its way out is responsible for global warming.

On a global scale, the atmosphere's circulation and weather is an attempt to balance differences in solar energy that the earth receives across the globe.  Sunlight at the tropics is intense and direct and a lot of heating of land, atmosphere, and oceans occur there.  Sunlight in the polar regions is weak and indirect and does not do a good job of heating up the region.  Currents in wind and ocean water carry energy from the tropics toward the poles to help balance out the energy differences across the globe.

The daily change of temperature and the seasonal changes of weather are both effects of the delicate balance of incoming sunlight and outgoing longwave radiation.  On a clear and windless day, the temperature will rise following the course of the sun.  But even after noon, when solar radiation begins to decline, temperatures will continue to rise because the land is trying to reach a balance of incoming and outgoing energy.  In winter when days are short, the peak temperatures can occur 2-3 hours after noon.  In summer when days are longer, it can be 4 to 5 pm before the highest temperatures are reached.  The coolest temperatures usually occur just around sunrise when no sunlight has hit the ground for several hours.  Planning fieldwork late in the afternoon is more likely to result in ill effects of high temperatures and heat exhaustion in summer because of this thermal lag.

Description: This activity examines the change of incoming solar energy throughout the year. An animation is used to assist students in understanding the changes in solar radiation.

Description: This activity focuses on the forms of heat transfer that take place within the Earth's atmosphere. Students will develop an understanding of how things heat up and which things will heat up faster than others.

Description: This activity focuses on how solar radiation affects sea surface temperatures. Students set the controls on an animation to view how the temperatures change.