Why do I care?   The effects of drought play a large role in the water supply to communities as well as damage to crops and other vegetation.

I should already be familiar with: Drought

Drought can have many devastating effects on communities and the surrounding environment. The amount of devastation depends on the strength of the drought and the length of time an area is considered to be in drought conditions. Drought has greater impacts on poorer communities than on more prosperous communities who have better opportunities to bring in resources from other areas. Drought, however, can be very harsh on any type of community.

One impact of drought on communities is its effect on water supply.  When drought conditions persist with no relief, or not enough precipitation to lift the drought conditions, water restrictions are put into place by local or state governments. This is important since communities need to ration water consumption so that the reservoirs and streams do not run too low on water to meet the needs of utility companies and others who use water as well as the local ecosystems.

Water restrictions are often provided in several stages, depending on the severity of the drought.  In moderate to severe drought areas, water restrictions may be put into place to limit whether or not communities are able to wash their cars or water lawns. Sometimes people are able to water their lawns at night because the sun is not beating down and causing the water to evaporate before the plants can absorb it. By watering the grass at night, nutrients and moisture can get into the roots of plants, grass and crops which in turn keep the vegetation healthy and the ground stable. In exceptional drought conditions (the highest drought category), the option for reduced watering of the yard may not exist. This causes the grass and surrounding land to dry up. If crops are not able to receive any water, farmlands can dry out and crops can die. By rotating crops each year, this gives the soil the opportunity to hold onto nutrients more readily during drought years. With a crop shortage from the drought conditions, prices for food may increase because the demand for the crop is much higher with the limited amount. If people are not able to afford increasing prices during drought conditions, it is possible for communities to suffer health problems because of the lack of healthy food and clean water for sanitation.  In poor countries, it can even result in starvation for large numbers of people. 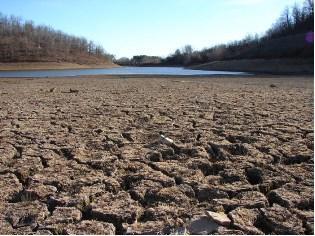 Water may become especially polluted during times of drought due to the lack of rain water to dilute industrial and agricultural chemicals.  This toxic water can be harmful to plants and animals that use it and  make it difficult to clean for drinking water.  Crops are also receiving less water by volume. In some areas, farmers may be able to irrigate by pumping from groundwater or surface water like farm ponds.  However, as a drought worsens, these options may disappear.  In the worst droughts, farmers are unable to maintain their fields because of the drought conditions and the restrictions placed on water. Some farmers and communities will re-locate to other less drought areas in order to sustain a living. The now untended land dries up from the lack of moisture and most plants will not be able to survive in these drought areas. Plants absorb the nutrients from the soil in order to survive. When these nutrients are used up, the plants will begin to wilt. Without water getting into the soil, the ground will dry out and become unstable. Erosion increases and loss of topsoil can be severe if a high-intensity rain falls on ground that is lacking a ground cover of plants.

A final impact of drought can be reduced electrical generation. In the Southeast, most power generation depends on the use of water for hydropower or coal-burning and nuclear plants, so if water use is restricted, then power plants may need to be shut down and more expensive kinds of energy generation such as burning natural gas may need to be used.  This is particularly a problem when the drought is accompanied by high temperatures and increased demand for air conditioning.

The effects of drought on public health can be numerous and severe. Drought is not only linked to increases in heat-related illness, waterborne illness and cardiorespiratory illness, but also mental illness (due to crop failure or other loss of income), recreational risks (due to harmful algal blooms), limited food availability (due to crop failure), and reduced living conditions (due to higher electricity demands).1

Among individuals whose livelihoods rely on water, such as farmers, financial-related stress can lead to mental health illness including depression and suicide thoughts. Moreover, decreased quantities and quality of water during drought can lead to reduced availability of electricity. Individuals who rely heavily on equipment or machines that run on electricity, such as the elderly or hospitalized patients, can be at increased risk for injury or death.

Drought can also have significant impacts on the economy. For example, in the first year of a severe drought from 2007 to 2009, the U.S. Southeast lost over $1.3 billion due to destruction of major crops such as corn, wheat, soybeans, cotton, and hay. During this unprecedented drought, utility companies in North Carolina enacted water conservation measures, while city officials banned filling of new swimming pools, serving of water at restaurants unless requested, and requested that hotel guests reuse towels and linens during their stay.1,2