Cloud seeding is the process where substances like dry ice and silver iodide are put into clouds in an attempt to make precipitation fall.  Cloud seeding has also been used to dissipate fog and weaken some storms.

Why do I care? Cloud seeding can be used to enhance precipitation and has been used to prevent areas from destruction from drought.

I should already be familiar with: Precipitation Types

Natural cloud seeding occurs when fallstreaks composed of ice crystals from cirrus clouds fall into cumulus or stratus clouds lower in the atmosphere.  The ice crystals act like seeds to start the formation of larger crystals which lead to raindrop formation.  Silver iodide has been used in cloud seeding because it has a similar physical structure to natural ice crystals.  It is often used in combination with dry ice, which is very cold.  The silver iodide lowers the temperature in the cloud and provides more ice crystal seeds, but doesn't freeze all of the liquid water, either.  Ice crystals grow from the liquid freezing onto them and then the ice lumps together.  The ice crystals then fall and create snow, and if they melt before reaching the ground, produce rain. 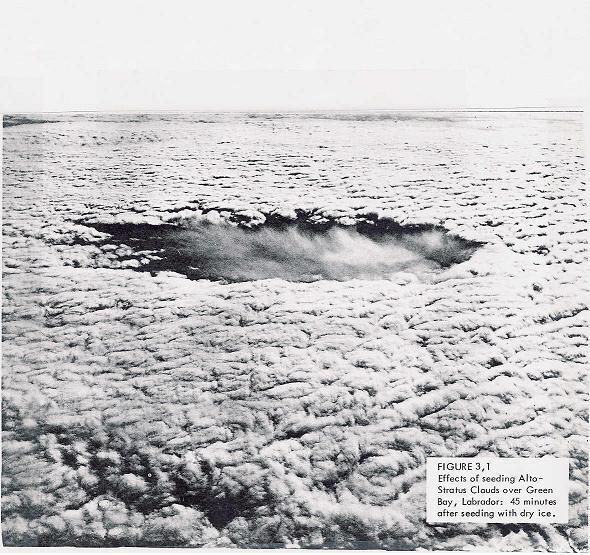 Figure A. A hole develops in a cloud 45 minutes after it is seeded.

Cloud seeding isn’t just used for enhancing precipitation.  It can also be used to evaporate fog and clouds.  At airports, when the fog is very cold, adding large quantities of dry ice causes the fog to dissipate because it turns all the liquid to ice, and the ice settles to the ground, leaving clear air. The dry ice cools the liquid, supercooled water droplets even further and the droplets turn into ice crystals. However, this only works with fog that is very cold, but not ice.

Hail and lighting can be very damaging.  Adding large amounts of dry ice to thunderstorms has the potential to suppress the formation of hail.  Since hail can cause intracloud lightning, suppression of hail causes suppression of lightning, too. Russian scientists claim this method of hail suppression works very well, while US scientists say the experiments are inconclusive from experiments conducted in the early to mid-1900s.

Hurricane modification was only tried a couple times in the 1960s.  The first time that hurricanes were seeded, the hurricane slightly weakened and the eye of the hurricane became much larger.  The second time, the hurricane weakened dramatically.  It is still unknown whether these hurricanes would have weakened naturally or if the seeding had something to do with it.  However, it is difficult to do experiments with seeding of hurricanes now because of the potential for changes in path or strength which could result in significant damage and legal liabilities.

The use of cloud seeding is very controversial.  Some people say it isn’t worth the resources, because even the most dramatic rainfall increases only amount to 5-20%.  If it is done incorrectly, it can even reduce the amount of rain that might have fallen by dissipating clouds.  If it does work, some people say it will alter energy transport across the world and have catastrophic repercussions in the future.  Some countries employ cloud seeding to try and maintain a level of precipitation high enough to support them, but think nothing of the countries downstream who would have gotten the rainfall had the clouds not been seeded.  Even at the local level, seeding clouds in one place could result in a reduction of rainfall downwind and negatively impact their crops, resulting in potential lawsuits.  At the 2008 Summer Olympic Games, Beijing employed cloud seeding to clear the air of pollutants and to keep it from raining over the Bird’s Nest stadium while the games were going on.  Occurrences like this may become more frequent if climate change alters precipitation patterns and we try to adapt to it with cloud seeding.