Sea and Land Breezes describe the wind that blows onshore from sea to land during the day and blows offshore in the evening.

Why do I care?  During the summer, the sea breezes are stronger than in winter because of the large temperature differences between land and ocean water that time of year. The fronts caused by the sea breezes along the coast can provide a trigger to daily thunderstorm activity in coastal areas, particularly along the peninsula of Florida.

I should already be familiar with: Temperature Gradient, Convergence and Divergence

A sea breeze describes a wind that blows from the ocean inland towards land. This breeze occurs most often in the spring and summer months because of the greater temperature differences between the ocean and nearby land, particularly in the afternoon when the land is at maximum heating from the sun.

During the day, the sun heats up both the ocean surface and the land. Water is a good absorber of the energy from the sun. The land absorbs much of the sun’s energy as well.  However, water heats up much more slowly than land and so the air above the land will be warmer compared to the air over the ocean. The warm air over the land will rise throughout the day, causing low pressure at the surface. Over the water, high surface pressure will form because of the colder air. To compensate, the air will sink over the ocean. The wind will blow from the higher pressure over the water to lower pressure over the land causing the sea breeze. The sea breeze strength will vary depending on the temperature difference between the land and the ocean.

At night, the roles reverse. The air over the ocean is now warmer than the air over the land. The land loses heat quickly after the sun goes down and the air above it cools too.  This can be compared to a blacktop road. During the day, the blacktop road heats up and becomes very hot to walk on. At night, however, the blacktop has given up the added heat and is cool to the touch. The ocean, however, is able to hold onto this heat after the sun sets and not lose it as easily. This causes the low surface pressure to shift to over the ocean during the night and the high surface pressure to move over the land. This causes a small temperature gradient between the ocean surface and the nearby land at night and the wind will blow from the land to the ocean creating the land breeze. 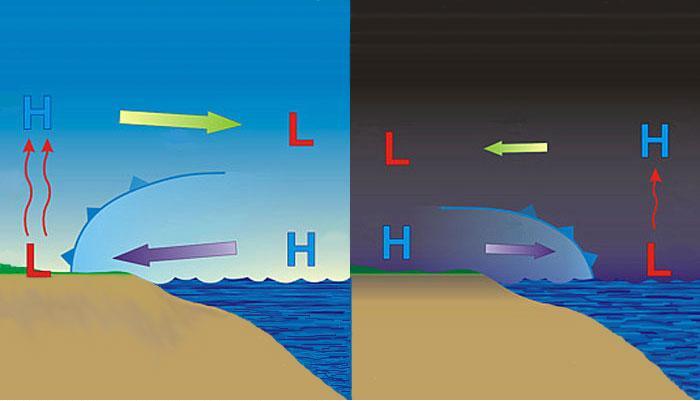 At certain locations, converging sea breezes can cause thunderstorms during the afternoon. On the peninsula of Florida, winds are blowing easterly (from the east) off the Atlantic Ocean and westerly (from the west) off the Gulf of Mexico. This causes sea breezes to converge towards the central part of the peninsula.  The air rises, forming clouds, precipitation, and potentially, thunderstorms. These sea breezes are very beneficial to the climate of Florida and along the East Coast. On occasion, these sea breezes are not strong enough and do not converge inland over Florida. When this happens, forest fires are then at risk of occurring if the proper conditions exist with no relief from precipitation due to the sea breezes. 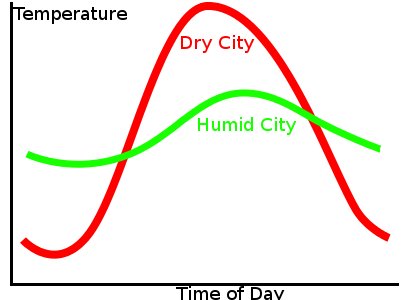 Figure B. Temperature variations throughout the day. (Image from University of Wisconsin-Madison).

Monsoon Systems, Life Cycle of a Thunderstorm, Drought and Wildfires