General Circulation of the Atmosphere

Winds circulate around the globe because of the rotation of the earth and the energy from the sun.

Why do I care?  The general direction of the winds varies around the globe depending on factors like latitude and proximity to oceans. The direction of the wind at various levels in the atmosphere determines the local climate and steers around weather systems and severe weather.

I should already be familiar with: Temperature Gradient, What Drives Weather, Stability, Air Masses, Convergence and Divergence, Tilt and Latitude, Coriolis Effect, Latent and Sensible Heat 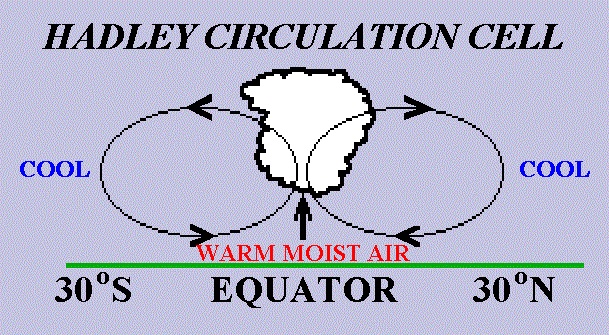 The circulation cell closest to the equator is called the Hadley cell.  Winds are light at the equator because of the weak horizontal pressure gradients located there.   The warm surface conditions result in locally low pressure.  The warm air rises at the equator producing clouds and causing instability in the atmosphere.  This instability causes thunderstorms to develop and release large amounts of latent heat.  Latent heat is just energy released by the storms due to changes from water vapor to liquid water droplets as the vapor condenses in the clouds, causing the surrounding air to become more warm and moist, which essentially provides the energy to drive the Hadley cell.

The Hadley Cell encompasses latitudes from the equator to about 30°.  At this latitude surface high pressure causes the air near the ground to diverge.  This forces air to come down from aloft to "fill in" for the air that is diverging away from the surface high pressure. The air flowing northward from the equator high up in the atmosphere is warm and moist compared to the air nearer the poles. This causes a strong temperature gradient between the two different air masses and a jet stream results. At the 30° latitudes, this jet is known as the subtropical jet stream which flows from west to east in both the Northern and Southern Hemispheres. Clear skies generally prevail throughout the surface high pressure, which is where many of the deserts are located in the world. 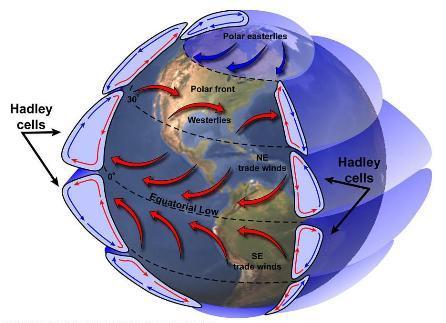 From 30° latitude to 60° latitude, a new cell takes over known as the Ferrel Cell. This cell produces prevailing westerly winds at the surface within these latitudes. This is because some of the air sinking at 30° latitude continues traveling northward toward the poles and the Coriolis force bends it to the right (in the Northern Hemisphere). This air is still warm and at roughly 60° latitude approaches cold air moving down from the poles. With the converging air masses at the surface, the low surface pressure at 60° latitude causes air to rise and form clouds. Some of the rising warm air returns to 30° latitude to complete the Ferrel Cell.

The two air masses at 60° latitude do not mix well and form the polar front which separates the warm air from the cold air. Thus the polar front is the boundary between warm tropical air masses and the colder polar air moving from the north.  (The use of the word "front" is from military terminology; it is where opposing armies clash in battle.)  The polar jet stream aloft is located above the polar front and flows generally from west to east. The polar jet is strongest in the winter because of the greater temperature contrasts than during the summer.  Waves along this front can pull the boundary north or south, resulting in local warm and cold fronts which affect the weather at particular locations.

In contrast to the Hadley, Ferrel and polar circulations that run along north-south lines, the Walker circulation is an east-west circulation.  Over the eastern Pacific Ocean, surface high pressure off the west coast of South America enhances the strength of the easterly trade winds found near the equator. The winds blow away from the high pressure toward lower pressure near Indonesia. Upwelling, the rising of colder water from the deep ocean to the surface, occurs in the eastern Pacific along South America near Ecuador and Peru. This cold water is especially nutrient-rich and is stocked with an abundance of large fish populations. By contrast the water in the western Pacific, near Indonesia, is relatively warm. The air over Indonesia rises because of the surface low pressure located there and forms clouds. This causes heavy precipitation to fall over the western tropical Pacific throughout the year. The air then circulates back aloft towards the region above the surface high pressure near Ecuador and this becomes the Walker circulation. The air sinks at this surface high pressure and is picked up by the strong trade winds to continue the cycle. 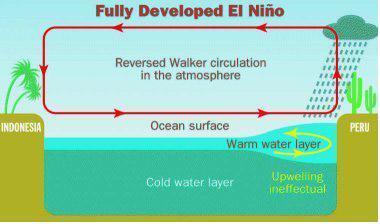 On some occasions, the Walker circulation and the trade winds weaken, allowing warmer water to "slosh back" towards the eastern tropical Pacific near South America.  You can think of this as blowing a fan over a bathtub full of water.  If the fan blows steadily, the water at the side farthest from the fan will tend to pile up downwind.  If you suddenly slow the fan down, some of the water that was built up will surge back towards the fan.  The warmer water will cover the areas of upwelling, cutting off the flow of nutrients to the fish and animals that live in the eastern Pacific Ocean.  This warming of the eastern Pacific Ocean is known as El Niño.  The warmer water will also serve as a source for warm, moist air which can aid in the development of heavy thunderstorms over the mass of warm water.

Changes in the Hadley cell and Walker circulation can result in dramatic climate variations for many regions. In an El Niño winter, for example, the presence of the warm water in the eastern Pacific shifts the position of the subtropical jet, leading to heavy rainfall in Florida and southern Georgia.  You can learn more about how El Niño and its opposite, La Niña, affects the weather in the Southeast at www.agroclimate.org, which allows you to look at differences in climate in different years depending on the El Niño phase.

In a warming climate, the Hadley cell could increase in length and alter the climate of regions around 30°. For example, many deserts in the northern hemisphere are located around the 30° latitude, and if the Hadley cell were to increase in length, that could cause dry conditions to move north of 30°. Ultimately, this would alter the precipitation patterns of many regions, including the Southeast.