Why do I care? Albedo is another name for reflectivity. The albedo of a surface determines how much sunlight will be absorbed and warm the surface compared to another surface that reflects most of the light and does not change temperature.

I should already be familiar with: Radiation

The amount of energy that is reflected by a surface is determined by the reflectivity of that surface, called the albedo.  A high albedo means the surface reflects the majority of the radiation that hits it and absorbs the rest.  A low albedo means a surface reflects a small amount of the incoming radiation and absorbs the rest.  For instance, fresh snow reflects up to 95% of the incoming radiation.  Therefore, fresh snow has a high albedo of .95.  By contrast, water reflects about 10% of the incoming radiation, resulting in a low albedo of .10.  Since 30% of the sun’s energy is reflected by the entire earth, the earth has an average albedo of .30.  Generally, dark surfaces have a low albedo and light surfaces have a high albedo.  For example, in summer the black asphalt road is scorching hot. This is because much of the heat is absorbed by the asphalt allowing the asphalt to burn your feet as you walk on it. When it’s hot outside, lighter clothing keeps you cooler because it reflects most of the sunlight that hits it, keeping you cool. Keep in mind that it is still possible to get sunburnt while wearing a light colored shirt with no sunscreen underneath. Although much of the incoming radiation is reflected, there is still quite a bit that is absorbed by the shirt. 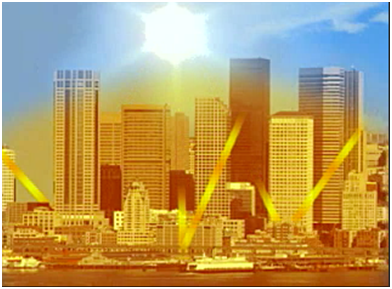 Because of the effects of albedo, highly developed areas such as urban cities can experience higher average temperatures than surrounding suburban or rural areas, a phenomenon known as the “urban heat island effect.”1 The higher average temperatures can be attributed to less vegetation, higher population densities, and more infrastructure with darker surfaces (asphalt roads, brick buildings, etc.) that generate, reflect, and trap heat during hot summer months. Research has found that in some urban cities, the average air temperature can be as much as 22°F hotter in the evenings than surrounding areas.2,3 People who live in urban cities may be at greater risk for heat-related illnesses.

The state of North Carolina, however, has much more rural land mass and less densely populated urban areas than other states, making it less susceptible to the urban heat island effect.4,5

In fact, research suggests that in North Carolina, heat-related illnesses are more likely to occur in rural areas than in urban areas.6 Albedo is also related to sea level rise. The oceans’ dark surfaces facilitate the absorption of heat from the sun, melting large masses of ice in the ocean.7 As glaciers and ice caps in the ocean melt, sea level rise coupled with more frequent storm surges, may result in more frequent and intense flooding.8 These extreme weather events can reduce the availability of drinkable water, compromise the integrity of public health infrastructure, and cause direct death or injury in coastal communities.9,10

Activity: What Factors Impact a Greenhouse?  (Link to original activity.)

Description: This activity focuses on the factors that affect the heating in a greenhouse. Students will develop their own model using 2-liter bottles and measure how each bottle warms up and retains heat.