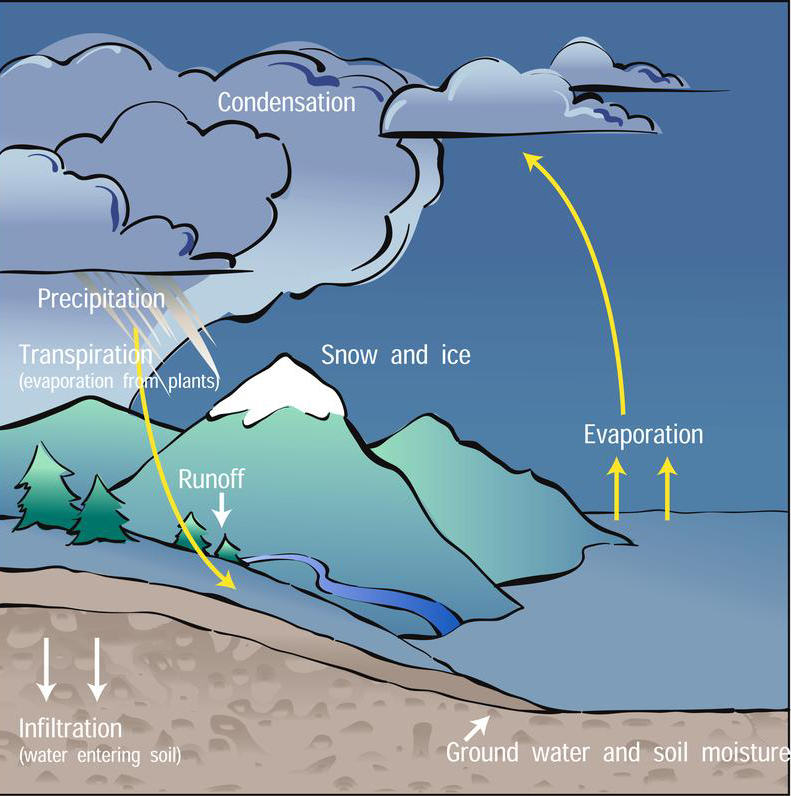 Figure A: The Water Cycle

The third and final step of the water cycle is precipitation. Precipitation includes all water that falls from the sky, both in liquid and frozen form, which reaches the ground. Once the precipitation makes its way to the ground it can end up soaking into the ground, run off into streams and lakes, become snow cover, be used by plants, be inhaled by animals or fall directly back into the ocean. Then the water cycle can begin again and continue for millions of years to come.

Figure B: Infiltration and runoff

The factors that impact infiltration also impact surface runoff. Runoff occurs when water flows across the ground surface. If no water is able to seep into the ground, the water will flow across the ground surface. This occurs many times near mountains as water flowing quickly down a mountainside is unable to be absorbed by the ground. If a certain type of soil does not absorb water very well or if the soil is already saturated, then the water remains on the surface. Clay is an example of a soil that absorbs water slowly in comparison to sandy soils. More runoff will occur over land with clay soil rather than land with sandy soil. Runoff can also occur during snowmelts from mountainsides.

How does this relate to forestry? 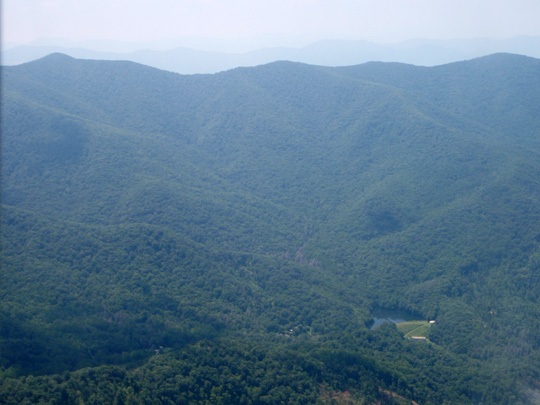 Figure C: Woodfin Watershed in Western North Carolina is a forested watershed which helps to protect water resources from pollution and is protected by conservation efforts. (Image from the Southern Appalachian Highlands Conservancy www.southwings.org)

Forests and trees represent a crucial part of the water cycle. The soil absorbs precipitation that falls from the clouds, and trees draw water from the soil into their roots to support all of their life major processes such as growth, reproduction, and maintenance. As water travels from the roots out to the leaves, water is lost through tiny pores, or stomata, in a process called transpiration. Transpiration and evaporation together comprise total evapotranspiration, the amount of water returned to the atmosphere as vapor to continue the water cycle. Forests use more water than lower-growing types of vegetation, and also produce lower surface runoff, groundwater recharge, and water yield. Tree species and age, forest structure, and harvest patterns influence the amount of water a forest requires. For example, evergreen conifer trees such as pines demand more water than deciduous trees. Young trees require more water than older trees. In the Southeast US particularly water-inefficient tree species include black cherry, dogwood, yellow poplar, basswood, birch, buckeye, and sycamore. Thinning out a forest can help to reduce the water demand by the trees, but increases erosion and produces holes in the canopy which removes shade and shelter for other forest species. Maintaining a developed understory layer to protect soil moisture reduces the water requirements of forests, even if many trees are cutdown to reduce water demands by trees.

As climate change causes greater precipitation extremes and higher temperatures, trees and forests will play an increasingly vital role in the Earth's water cycle. Forests increase water quality by minimizing erosion and intercepting polluted runoff, which may become more important if climate change threatens local water supplies. Forests also produce less chemical and nutrient pollution than equivalent, more intensively managed agricultural operations. Forests can reduce the impacts of floods by absorbing water during periods of abundance and slowly releasing it during dry spells. If planting trees to sequester CO2 to reduce carbon dioxide concentrations in the atmosphere, managers must be sure the trees’ water demand will not worsen regional water shortages during drought—particularly for fast-growing, short-rotation forest crops such as poplar.

7th grade science: 7.E.1.2 : Explain how the cycling of water in and out of the atmosphere and atmospheric conditions relate to the weather patterns on earth.

Relationships to topics: The Water Cycle