Trends in climate can be caused by natural changes or variability in ocean currents, land use, solar radiation, or other factors. They can also be the result of manmade influences on climate. While some trends in climate variables reflect local changes in climate at a single location, trends across regions and the globe indicate significant movements away from "average" conditions which could cause disruptions in society and global ecosystems.

Why do I care?  A trend away from "average" conditions may indicate that using climate averages for planning may not always give you the best results.  Trends can indicate that climate conditions are changing and need to be addressed in personal and societal planning.

I should already be familiar with: Temperature, Precipitation Types

A trend is used to describe a long-term shift in climate.  Most often, a trend describes a linear change in one variable like temperature over a long time period.   A trend towards a warmer climate over time, for example, would indicate that conditions are changing in a way that temperatures are gradually warming up over time.  The strength and direction of the trend depends on what time period you pick to calculate your trend, the month or season you look at, and what variable you are using to determine your trend.

On the graph a red trend line is also plotted.  It shows a slight warming trend in North Carolina from 1895-2009 when you look at the whole time period as a whole. This means that the state average temperature has increased slightly above the  long-term average over the last century.   However, the trend you get depends critically on which time period you pick to determine your trend.  You can see this in more detail in the graphs farther down the page. 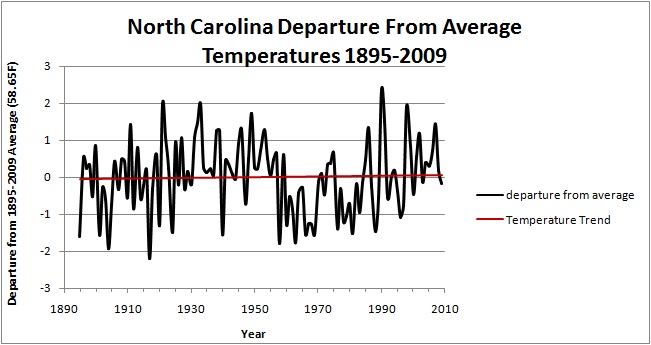 Figures B and C represent the temperature trends in North Carolina over smaller time frames than the graph above. In each case the same information on average state temperature departure is shown, but here we concentrate on a shorter time period to see how the trends for these time periods are different. 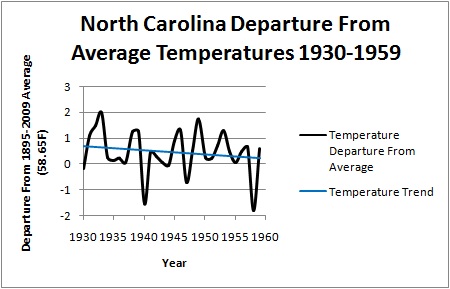 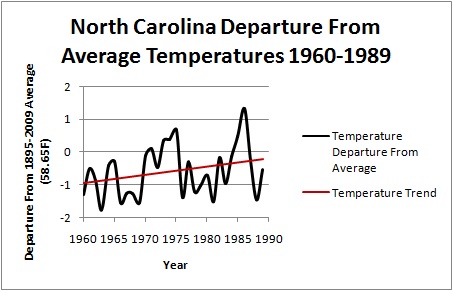 Figures B and C show how climate, in this case represented by temperature, can change from one generation to the next. The trends in these two graphs are quite different than the long-term trend shown in Figure A for 1895-2009.  This shows that the time period that you grew up in can really affect your perception of how the weather and climate of your area is changing. 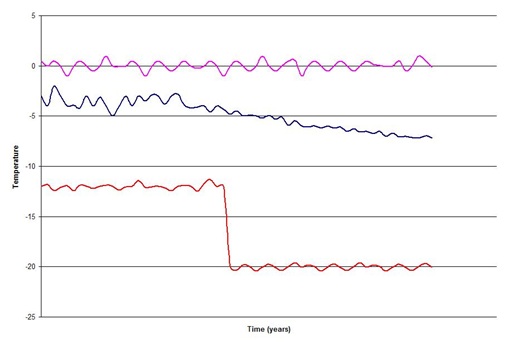 The trend lines on Figures A-C represent a linear trend in average temperature. A linear trend shows a gradual change in temperature or any other measurable parameter from one year to the next. Not all changes in climate are linear trends, however.  Climate can change in a number of ways, including changes in variability with no change in average, quasi-periodic changes in weather associated with El Niño or longer-term ocean variability, and even abrupt climate changes such as you might expect to see if a large meteor collided with the Earth (see Figure D).   Some climate changes can also be exponential, which means that over time the difference from an old "average" climate grows larger and larger.

Want to learn more? Effects of Climate Change on the Southeast