Structure of the Atmosphere

The atmosphere has 4 layers: the troposphere that we live in near the surface of the earth; the stratosphere that houses the ozone layer; the mesosphere, a colder and lower density layer with about 0.1% of the atmosphere; and the thermosphere, the top layer, where the air is hot but very thin.

Why do I care? The structure of the atmosphere dictates the way the atmosphere behaves and controls how weather develops near the surface of the earth.

I should already be familiar with: Humidity, Temperature, Pressure, Density 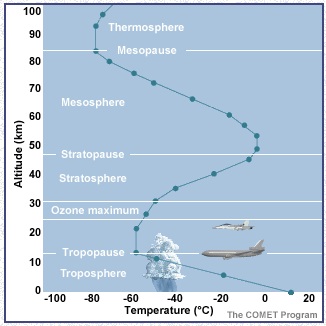 Figure A: The Layers of the Atmosphere (Image from the Comet Program)

Why Do Temperature and Pressure Decrease with Height? Figure B: Pressure Decrease with Height Rapidly Above the Surface

The molecules that make up the atmosphere are pulled close to the earth's surface by gravity. This causes the atmosphere to be concentrated at the Earth's surface and thin rapidly with height. Air pressure is a measure of the weight of the molecules above you. As you move up in the atmosphere there are fewer molecules above you, so the air pressure is lower. Figure B shows how pressure decreases with height. The black dotted lines show how much of the atmosphere is below you at a certain level. For example, at 10 miles up, 90% of the atmosphere is below you. At the peak of Mount Everest, as shown, the air pressure is 70% lower than it is at sea level. This means when mountain climbers breathe air on top of the mountain, they are only inhaling 30% of the oxygen they would get at sea level. It is no surprise that most climbers use oxygen tanks when they climb Mt. Everest.

Temperature vs. Height and Pressure of the Troposphere Temperature decreases with height in the troposphere. This is true for a couple different reasons. First, even though the sun's energy comes down from the sky, it is mostly absorbed by the ground. The ground is constantly releasing this energy, as heat in infrared light, so the troposphere is actually heated from the ground up, causing it to be warmer near the surface and cooler higher up. Another reason is the decreasing air pressure with height. If the warm air at the surface gets blown upward into the cooler air above it, the surface air will continue to rise. As air rises into areas of lower pressure it expands because there are less molecules around it to compress it. The molecules in the air use some of their energy to move apart from each other, causing the air temperature to decrease. The constantly decreasing air pressure in conjunction with the ground-up heating keeps the temperature in the troposphere decreasing with height.

In the real atmosphere, the actual vertical temperature structure depends on air masses with specific properties of temperature and humidity being blown into the area as well as effects of daytime heating. If you have a layer of air with warm temperatures above the surface, we call that an "inversion". That layer can act as a cap which prevents clouds and sometimes severe weather from forming.

7th grade science: 7.E.1.1 : Compare the composition, properties and structure of Earth's atmosphere to include mixture of gases and differences in temperature and pressure within layers.

Earth Science: EEn.2.5.1 : Summarize the structure and composition of our atmosphere.