Although thunderstorms can vary in size and shape, we can classify them into four main groups: single cell, multi-cell clusters, multi-cell lines, and supercells.

Why do I care?  A better knowledge of the various types of thunderstorms can help farmers distinguish between severe and non-severe thunderstorms and the weather hazards associated with them.

I should already be familiar with: Fronts, How Clouds Form, Precipitation Types, Life Cycle of a Thunderstorm 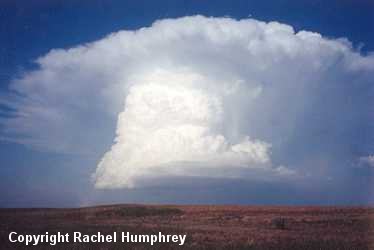 Single cell thunderstorms are sometimes referred to as  "airmass", “popcorn”, or “pulse" thunderstorms, and usually do not produce severe weather. They often form in regions of warm, moist air with no strong fronts in the area.  Each thunderstorm follows the life cycle of a typical thunderstorm with development, maturity, and decay occurring over a period of 30 minutes to an hour.  They may contain heavy rain and can also produce occasional downbursts, small hail, and (rarely) weak tornadoes, but these are fairly rare in single cell storms. 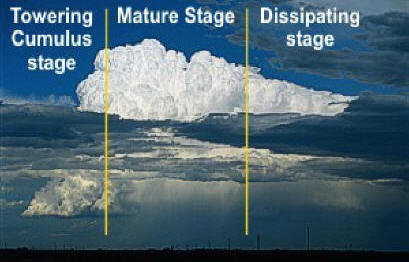 Multi-cell lines are like multi-cell clusters except that they form in a line rather than in a group together. These lines of storms are often called squall lines and they can stretch up to several hundred miles long. The gust front in squall lines is focused mostly ahead of the storms rather than spreading out in all directions. The most dangerous feature with squall lines are often the winds, as winds with these lines can sometimes exceed over 70 mph! Other threats include isolated tornadoes, hail, and flash flooding.  Squall lines most often form in the warm, moist air ahead of an advancing cold front and can move through several hours before the main front passes.

Supercells are the most dangerous kind of thunderstorms as they can produce large hail, dangerous winds, and violent tornadoes. In 2009, a supercell in Aurora, Nebraska dropped hail so large that it left holes in a roof of a house that were big enough to crawl through! Other supercells that day produced tornadoes in Kansas and Nebraska, but luckily no one got hurt. Thankfully, supercells are one of the rarest kind of thunderstorms that exist, and only form under certain conditions. What makes a supercell unique from all other thunderstorms is the presence of a mesocyclone. A mesocyclone is basically an area of strong updrafts which spin as the air moves upwards. The main way mesocyclones form are from the wind shear in the atmosphere.  On radar, supercells can often be seen in a typical "hook echo" pattern, which shows a rain-free area right where the strongest updraft is occurring.  The large hail and/or tornadoes are most often found in the wrap-around hook near the back of the storm as it is seen on radar.