Ozone isn’t a typical greenhouse gas.  It has two distinct functions in the atmosphere.  High in the stratosphere, it absorbs ultraviolet light from the sun and protects the earth.  Near the ground, it serves as a pollutant and contributor to smog and also has greenhouse characteristics.

Why do I care? Ozone is an important gas because it affects our daily lives, especially in the hot, stagnant summer days. 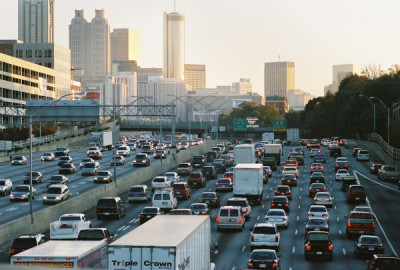 Figure A. Traffic congestion contributes to an increase in greenhouse gases. (Image from USDOT).

Ozone is a molecule that is made up of three oxygen atoms linked together.  Because of its distinct chemical properties, it serves a dual purpose in the atmosphere.  In the stratosphere, ozone forms a layer that protects us from the sun by absorbing harmful ultraviolet radiation before it gets to the surface (see Ozone Layer). The ozone hole mentioned in newspapers and magazines is a decrease in ozone at high levels caused by man-made gases called chlorofluorocarbons (CFCs), which destroy ozone at cold temperatures high up in the atmosphere.  The ozone hole has been linked to increases in skin and other cancers in populations that spend a lot of time outdoors, such as farmers.

Down here in the troposphere, however, ozone causes problems.  Even though ozone is pure oxygen, it can’t be used by our lungs when we breathe.  The lifespan of a typical ozone molecule is on the order of hours to days, but it still has a dramatic impact on our local weather.  It has been linked to spikes in daily temperature and in some instances extreme heat waves.  There can be days at a time where the air is hot and stagnant, especially during the summer.  During this time automobile exhaust can be broken down into ozone, which absorbs the heat and makes it even hotter.  Ozone added to the severity of heat waves of the northeastern US in the summer of 1988 and the European heat wave in the summer of 2003.  Ozone is also a chemical irritant and is a component of smog, so it can aggravate asthma and degrade automobile finishes and building surfaces exposed to it.

Figure B. Ground-level ozone is dangerous to human health and exacerbates respiratory disease such as asthma. (Image from EPA).