Methane is second only to carbon dioxide in its impact as a greenhouse gas.  It comes from landfills, livestock, natural gas systems, wetlands, and natural gas stores within the earth.

Why do I care? Methane is the second most abundant greenhouse gas.  If you contribute to landfills, use natural gas, or own livestock, you are contributing to that concentration. 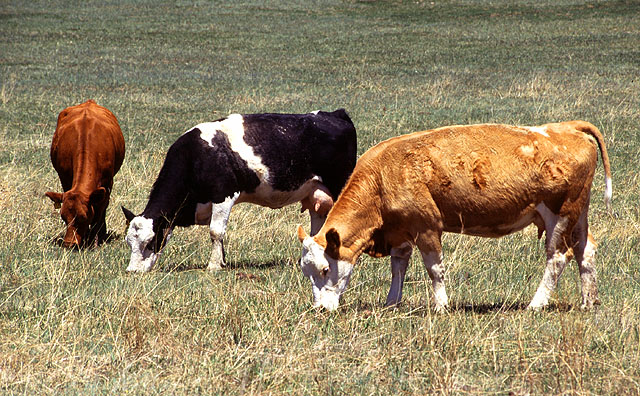 Methane is more commonly known as swamp gas.  This is the second most abundant greenhouse gas and it is 21 times more efficient at warming than CO2. CO2 is much more abundant in the atmosphere and remains in the atmosphere for a much longer period of time than methane and therefore has a larger overall warming effect in the atmosphere than methane does. Methane is produced anthropogenically by landfills, ruminant livestock, biomass burning and natural gas systems.  Some natural sources are wetlands and termites.  Methane is the largest component of natural gas, which is used as a fuel source once the contaminants are removed.

The atmospheric lifespan of a molecule of methane is estimated to be around 12 years.  From 650,000 years ago until the industrial revolution, the concentration of CH4 never rose above .00000073% or 730ppb.  However, the current CH4 concentration, as of 2009, is around .000001774% or 1774ppb.  In the past fifteen years the concentration has not increased much, but scientists are hesitant to celebrate.  Some theories state that there are variations in output from wetlands and biomass burning, or there are more removal processes than previously thought.