Extremes of weather describe the range of possible weather and climate conditions that you can expect to encounter at your location. These can be expressed in a variety of ways, from the highest or lowest temperature ever reported at a site to a probability of occurrence for rare events like heavy rainstorms.

Why do I care?   Extremes of weather are the most likely conditions to cause damage to crops and danger to humans and animals.

I should already be familiar with: Temperature, Severe Weather Hazards, Averages and Normals 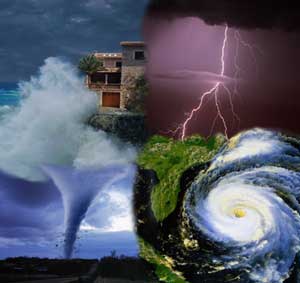 An extreme weather event is a type of event that doesn't occur very often. Generally, extremes occur less than 5 percent of the time when you look at the entire climate record (in statistical terms, more than 2 standard deviations away from average). Examples of extreme events include unusually heavy rainfall amounts in a short period of time, periods of drought, outbreaks of frigid temperatures, or unseasonal weather. These events typically affect relatively small areas but may become widespread if similar conditions like hot temperatures are experienced over a wide region.  In that case many individual station records can be set on a single day.

Many scientists believe that extreme weather events appear to be on the increase.  Some of this may be due to changing land conditions at the location of individual weather stations, since as areas become more urbanized the amount of pavement increases and causes temperatures to become warmer as well as increasing runoff from thunderstorms.  However, even in rural areas far from growing cities, the number of record-setting events  does not seem to be decreasing even as the station records get longer.

Rainfall can have three separate extreme values: duration of rainfall, intensity of rainfall, and the accumulation of rainfall.  These records are most often kept for daily and monthly amounts in climate studies, but can be kept for any time period that the rain gauge is capable of measuring. Rainfall is somewhat different than temperature in extremes because rainfalls of zero are quite common over short time periods, whereas temperatures tend to occur over a range equally spread between values above and below the long-term average.

Extreme rainfalls can occur under a number of different weather conditions.  Small areas of rain can be hit by intense thunderstorms and a lot of rain can accumulate over a short time period, especially if new thunderstorms develop and move over the same location (this is called "training" since the storms follow each other along the same track).  Sometimes extreme rainfall amounts can occur while hurricanes and tropical storms are making landfall or moving slowly over land.

When rain falls continuously over the same area for long time periods, significant floods can result.  The ground can only absorb a certain amount of rain each hour, and once it is saturated the rain has nowhere to go but to run off into the rivers, which can flood if too much water reaches them at once.  In northern areas, flooding can also occur if snow on the ground melts rapidly when hit by warm air or warm rain, especially if the ground is already saturated.

Engineers use statistical information about rainfall and flooding to estimate how often a given amount of rain is likely to occur.  A 100-year storm is a rainfall event that has a statistical probability of a one percent chance of occurring in any given year. Over a long time, this would mean that a storm of this magnitude would occur on average once every 100 years.  However, since a storm this strong has a one percent chance of occurring each year, it is possible to have two 100-year storms in less than 100 years, at a given location. Almost every state has at least one 100-year storm occur somewhere inside the state each year, just at different locations over time.

Below is a chart showing the likelihood that one of these events (storm or flood) would occur and the percentage they could occur in any given year.

Rainfall statistics like these are used in the design of roads, catchment basins, dams, and nuclear power plants.  These structures need to be able to withstand extremely heavy rains and remain safe to use.  An interstate highway is designed to drain a more extreme storm than a local city street since traffic is more vulnerable at higher speeds.  Dams are often designed with an extra flood control capacity included in how much water is allowed to be stored behind the dam, since too much water in the reservoir (from a slow-moving tropical storm, for example) could top the dam and wash it out, causing massive damage and even loss of life downstream. 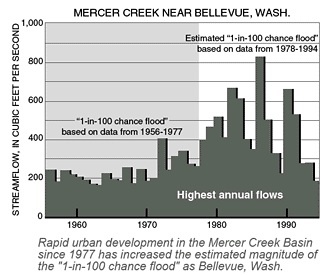 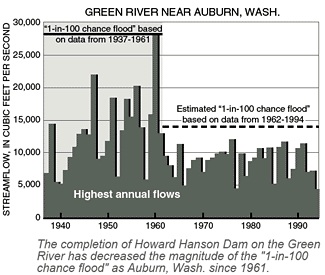