Drought occurs when sufficient water needed to sustain an area is not available, causing economic impacts on agriculture, society, and ecosystems.  It is most often caused by lack of rainfall over a long time period but can also be affected by unusually high temperatures and dry spells, particularly during summer months.

Why do I care?  Reduced amounts of precipitation for an extended period of time can lead to the loss of plant life and crops. Without needed rainfall, crops and animals can suffer serious declines, and food and water shortages can occur.

I should already be familiar with: Convergence and Divergence

Drought is a shortage of water supply across a region for an extended period of time. Most regions experience drought-like conditions periodically, and some areas can remain in those drought phases for several years. When an area experiences drought for an extended period of time, it has enormous impacts on life in these areas. This shortage of rainfall also has impacts on the soil hydration and animals living within these drought regions.  Figure A shows the most current picture of drought in the United States.

Figure A. Current US Drought Monitor map for North Carolina.

Drought is defined as an extended period of time where rainfall is deficient.  The amount of time could be several weeks to several years.  This is a general definition of drought, but there are several types of drought:

1)  Meteorological drought is a long-term measurement of lower than normal precipitation.  However, researchers cannot agree upon a numerical threshold that would define a drought (inches of rain or duration without rain) because it depends on the time of year, the natural climate (even deserts can have droughts, but they might look quite different than a drought in the Southeast), and the plant development stage at the time of occurrence.

2)  Hydrological drought is a lack of water in subsurface and surface terms.  This includes the water supply that is held in streams, lakes, groundwater and other types of reservoirs.  Hydrologic droughts tend to develop over an extended time period.

3)  Agricultural drought is when there is not enough water to sustain crops.  Rainfall deficits during the critical growth periods of a crop (different from crop to crop) can result in large yield losses, or even complete crop loss.  Agricultural droughts can develop quickly during a dry spell if no rain at all is observed or when a heat wave puts unusual stress on plants at critical growing stages.

Shortage of water supply is not the only cause of drought conditions, though usually drought conditions begin with below average levels of precipitation. Any measures taken that reduce the ability of the land to hold water may result in drought impacts. Overfarming techniques do this as well as deforestation. Overfarming takes all the nutrients out of the soil that the plants/crops need to survive and essentially “kills” or desertifies the land. In rainforests, the reduced precipitation triggers the drought because the plants and animals in the rainforest depend on the overabundance of rainfall throughout the year. Deforestation within a rainforest adds to the decrease in the amount of precipitation. This decrease in the average amount of rainfall will reduce plant growth and kill the trees. With fewer trees covering the rainforest ground, there is less water vapor to saturate the surrounding air above the trees to form clouds and produce precipitation. Over an extended period of time, the rainforest could dry out and absorb less carbon dioxide because of the reduced plant growth. Essentially this will add enormous amounts of carbon dioxide into the atmosphere.

Lessened precipitation over an area can occur for many different reasons. One cause in particular is a persistent high pressure area or ridge over a region.  Sinking air flows within the area of high pressure, which leads to clear, fair skies during the day. This causes relatively warm temperatures across the regions affected by this upper-level ridge.  If this high pressure area stalls over an encompassing region for an extended period of time, warm surface temperatures could lead to maximum evaporation of water from the ground and nearby lakes. This evaporation can quickly dry out surface soils and reduce streamflows and reservoir levels in conjunction with the lack of precipitation input, increasing the strength of the drought both by lack of rainfall and by increased removal of moisture by evaporation.

Another possible cause for drought conditions is the wind pattern blowing inland from the ocean. The wind from the ocean brings warm, humid temperatures to the eastern coastal areas during the summer months. If these winds shift direction or weaken during the summer, less water vapor is brought inland from the ocean or Gulf of Mexico and lessened amounts of rainfall will fall over the coastal regions. This below-average precipitation could also lead to a drought across the Southeast US. Lack of tropical storm activity is also a factor in developing drought in the Southeast.  If the tropical storms that develop in the Atlantic and Gulf of Mexico follow a track towards Texas instead of towards the Southeast, Texas gets flooded while the Southeast swelters in heat and dry conditions.  On the other hand, if a slow-moving tropical storm moves over dry land in the Southeast, a drought can be reduced very quickly as the soils are moistened by the abundant rainfall. 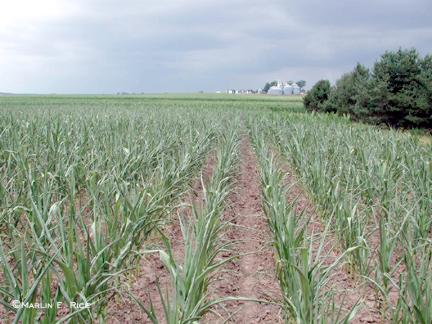 This example primarily focuses upon agricultural drought.  Drought stress affects the individual plant, as well as the whole crop canopy.  Drought stress on a plant can have irreversible damage upon a plant, even before symptoms can be seen (i.e. wilt).  Although drought tolerance varies among crop plants, most need adequate water throughout their lifecycle (from germination to harvest) in order to be high yielding.  There are many plant breeding programs now that are looking to develop crop plants that do not require as much water.  Other breeding programs are looking at developing plants that are salt tolerant in order to use reclaimed water (such as on golf courses).

Drought signs in a plant include decreased leaf area, leaf drop, root growth, stomatal close, yellowing leaves, wilt, and finally complete death.  It is interesting to note that plants undergo damage from water stress, even before the wilt signs are seen. 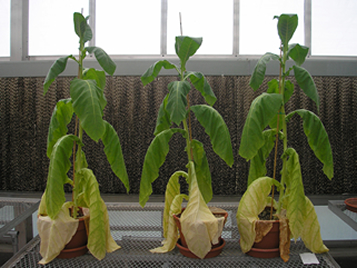 When a water deficit occurs, the plant’s first response is to limit leaf expansion (less water is lost through transpiration).  The size of each leaf might decrease, but also the number of leaves on each plant is decreased.  As the stress continues, the plant will respond by dropping its leaves.  In some arid places, a plant might go through this cycle three or four times in a season.  Below the soil, the plant is also growing longer and more dissected roots in order to seek out pockets of water, or deeper sources of water.  Continued water stress also forces the plant to close stomata on the leaves to decrease respiration, which in turn decreases the amount of photosynthesis that occurs in the plant (yellow leaves will appear).  As the plant continues to be stressed, leaves may wilt and droop (in broadleaves) or curl inward (in grasses such as corn).  This action minimizes the amount of leaf surfaces in contact with air and the sun.  If the plant continues to be water-stressed, it will finally turn brown and simply die. 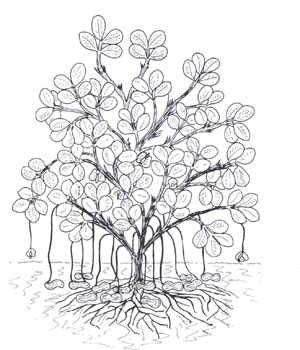 Some plants have more ability to develop drought tolerance than others. Plants also have the ability to take advantage of erratic water cycles if they are indeterminate in their fruiting pattern (i.e. peanuts and cotton).  This means that they can grow vegetatively, as well as reproductively at the same time.  Determinate crops such as corn have a very small window of opportunity to set corn ears, and if water is limited at that time, corn yield is severely reduced.

Some plants, like cacti are much better adapted to dry weather (arid conditions).  These plants are usually very efficient at using water, but may also have thick fleshy leaves that store water. This stored water allows the plant to survive in times of dry weather.  In fact, many who live in the Southwest areas of the US practice xeriscaping which uses drought tolerant plants as well as construction practices that capture any available rainfall.

North Carolina, along with many other Southern states, experienced one of the worst droughts in history during 2007 and 2008.  Many farmers had lower than average yields, and people saw the landscaping industry change in response to the lack of water.  It was not uncommon for farmers to completely deplete their water reservoirs that are used for irrigation.  Many landscaping companies resorted to using reclaimed water to irrigate residential and commercial landscapes.  Many homeowners were mandated to adhere to a restricted watering schedule, with severe fines from the city if not followed.  Some even resorted to drilling their own wells if they resided in the city to use for irrigation water.  A common sight in the landscape is now the rain barrel.  These are used to capture rainwater from roofs and gutters, and then used when needed to water the landscape or garden.