Clouds form when moist, warm rising air cools and expands in the atmosphere.  The water vapor in the air condenses to form tiny water droplets which are the basis of clouds.

Why do I care?  Clouds are important in that they can form precipitation and bring rain to crops and plants. They also shade the earth, affecting the temperature and keeping sunlight from directly hitting plants.

I should already be familiar with: Lifting Mechanisms, What Drives Weather, Radiation, Convection

Clouds can take on all sorts of shapes and sizes, ranging from thin wispy clouds (cirrus) to large, dark menacing clouds (cumulonimbus). While there are several factors that influence and affect the formation of clouds, the sun plays a major role in producing clouds.

To help understand basic cloud formation, let’s take a look at a field at sunrise. In the morning, the field is relatively cool. The sun begins to heat up the field, and throughout the day, the field becomes warmer and warmer. Certain areas of the field may begin to heat up more quickly than others due to the terrain or surrounding conditions (for example, bare soil heats up more quickly than vegetation). When this happens, a thermal (also known as an updraft) can form. A thermal can be thought of as a rising “blob” of warm air due to unequal heating of the earth’s surface. When the thermal forms at the surface, it is warmer than the surrounding air. Warm air has a tendency to rise while cold air sinks, and since the thermal is warmer than the air around it, the air in the thermal will rise. As it rises, it will begin to expand and cool, and will continue to do so until its temperature is the same as the surrounding air temperature 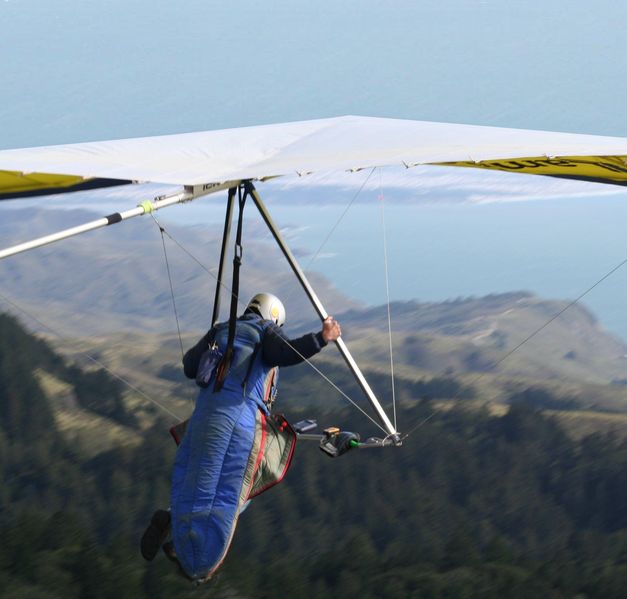 Figure B. Gliders use thermals to gain altitude.

The process of thermals forming in the atmosphere is a form of convection. Convection is basically the transfer of heat (in this case, through thermals) from one area to another. In our example, the heat was transferred from the surface into the atmosphere.

So how does convection help in the formation of clouds? As mentioned earlier, when a thermal rises, it begins to cool and expand. But why does it cool and expand as it rises? 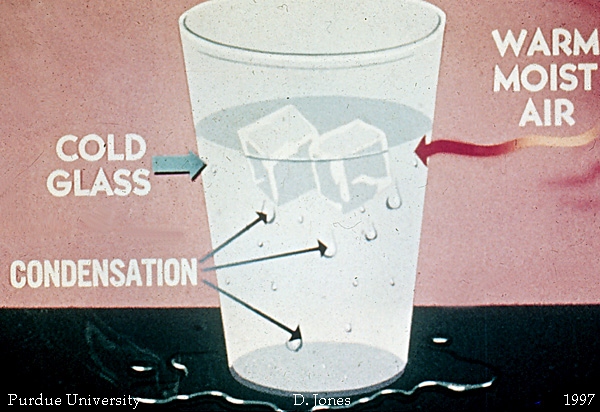 As the parcel cools and expands, it eventually reaches the saturation point where the relative humidity is 100 percent and condensation starts to occur.  When water condenses, it goes from a gas to a liquid. To visualize this, think of a glass of ice cold water sitting outside on a hot summer day. You may have noticed that little tiny drops of water collect on the side of the glass. The cold glass of water is actually cooling the air nearby it, and it causes the water vapor that is in the air nearby to condense. 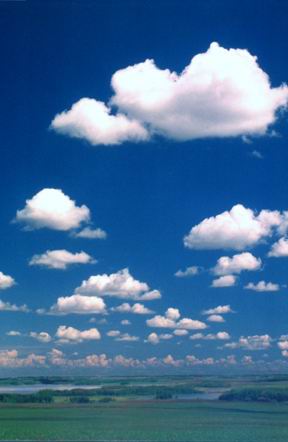 The droplets that form in clouds, though, are very tiny (unlike the ones that form on the glass) and are light enough to float in the air. Once the air reaches saturation (the point at which the water vapor condenses), clouds can begin to form. Sometimes, thermals do not become fully saturated and never produce clouds. In this case, dry convection is taking place. Warmer air at the surface is being transported into the cooler air in the atmosphere, but no clouds form.

It is important to note that this is just an explanation of basic cloud formation. There are several other factors that can influence and affect cloud growth and formation!

Activity: Cloud in a Bottle (Link to online tutorial.)

Description: This activity will demonstrate the direct affects of pressure and temperature on cloud formation.

Activity: What Factors Impact a Greenhouse?  (Link to original activity.)

Description: This activity focuses on the factors that affect the heating in a greenhouse. Students will develop their own model using 2-liter bottles and measure how each bottle warms up and retains heat.