Carbon dioxide is an abundant greenhouse gas that is believed to be the main cause of global warming.  The concentration is increasing fairly rapidly.  Carbon dioxide is a natural biproduct of animal and plant respiration but is also caused by human activities like fossil fuel burning, deforestation, and biomass burning.

I Should Already be Familiar with: Greenhouse Gases 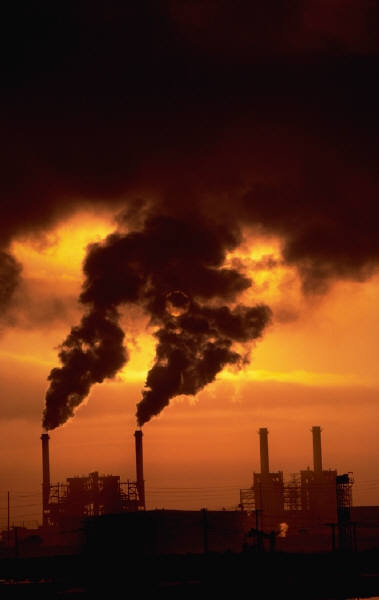 Figure A. Factory smokestacks. (Image from University of Calgary.

CO2 is the most abundant greenhouse gas in the atmosphere (excluding water vapor).  In its natural occurrence it helps keep the earth at a comfortable and life-sustaining temperature.  However, it is also believed to be responsible for the majority of global warming.  Some man-made sources of CO2 are the burning of fossil fuels, deforestation, biomass burning and cement production.  Natural sources include animal respiration and volcanic eruptions.  CO2 is removed from the atmosphere by photosynthesis and by the oceans absorbing it.  It is not well known how long the CO2 produced can linger in the atmosphere because there are so many processes that produce and remove CO2.  From 650,000 years ago until the industrial revolution the concentration of CO2 never rose above .000280%, or 280ppm, in the atmosphere.  Since then the level of CO2  in the atmosphere has grown gradually over time.  The CO2 concentration, as of 2009, is around .000385%, or 385ppm, and is increasing at an average global rate of 1.9ppm per year.

Since carbon dioxide is used in plant growth, an excess amount can act as a fertilizer to increase the growth of vegetation.  However, this only happens if the plants have sufficient water and nutrients.  In dry conditions or poor soil, the excess carbon dioxide will have no effect on the plants.

In the video below, Peter Griffiths, a NASA earth scientist explains how carbon is transferred to and from the atmosphere and the effects of the carbon crisis.

Disproportionally high levels of carbon dioxide in the air can result in higher amounts dissolved in the ocean, causing acidification and harm to ecosystems in the water.1 Studies have shown that certain marine species such as conchs, hard claims, and tropical urchins struggle to grow new shells or suffer from shell deterioration when exposed to elevated levels of carbon dioxide. Conversely, other species with more protective shells such as crustaceans, temperate urchins, mussels, and coralline red algae can create heavier shells under elevated carbon dioxide conditions.2Many of these species hold promise to treat human illness, as well as provide incentive for numerous recreational activities.

With respect to air quality, increased levels of carbon dioxide contribute to earlier pollen seasons, which may exacerbate or cause allergic diseases.1 Higher carbon dioxide levels are contributing to higher evaporation rates, which may threaten global water supplies. A 2006 study found that current levels of severe drought worldwide (3%) may be as high as 30% by 2100.3 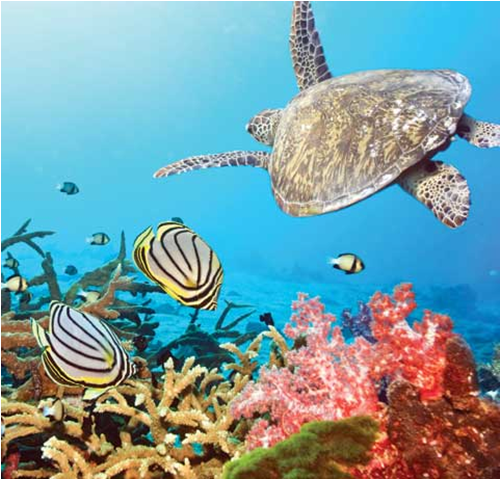 Figure B. Carbon dioxide levels are affecting the acidity of the seas and increased concentrations in the oceans are hindering the growth and survival of marine animals. (Image from EPA).

Carbon dioxide is also a major contributor to global warming and climate change via rising temperatures. Warmer temperatures may lead to increased frequency and severity of heat-related illnesses and reduced water and air quality, which in turn have a variety of adverse effects on human health. These include increased risk for cancer, food-borne and waterborne illnesses, cardiovascular and respiratory diseases, diseases from insect bites and spread of diseases from animals to humans, mental health and stress-related illnesses, and human developmental effects.1

Description: This activity will assist students in understanding their impact and contribution on the carbon dioxide level by calculating the energy use within their household and by switching to a hybrid vehicle.