There are many types of precipitation.  Rain and drizzle are the only liquid types; the freezing types are snow, sleet, freezing rain, and hail.  Hail is unique because it is frozen precipitation that generally only falls from thunderstorms in the summer.

I should already be familiar with: How Clouds Form

Technically, rain isn’t just any liquid that falls out of the sky.  Rain is defined as being water droplets of 0.5mm or greater.  Droplets smaller than half a millimeter are classified as drizzle.   Raindrops often form when small cloud particles collide and stick together, forming bigger drops.  Once the drops get large enough, they are too small for rising air to support, gravity draws them down to the ground. In air below 0 °F, raindrops may start as snow or ice crystals but melt when they fall into warmer air. 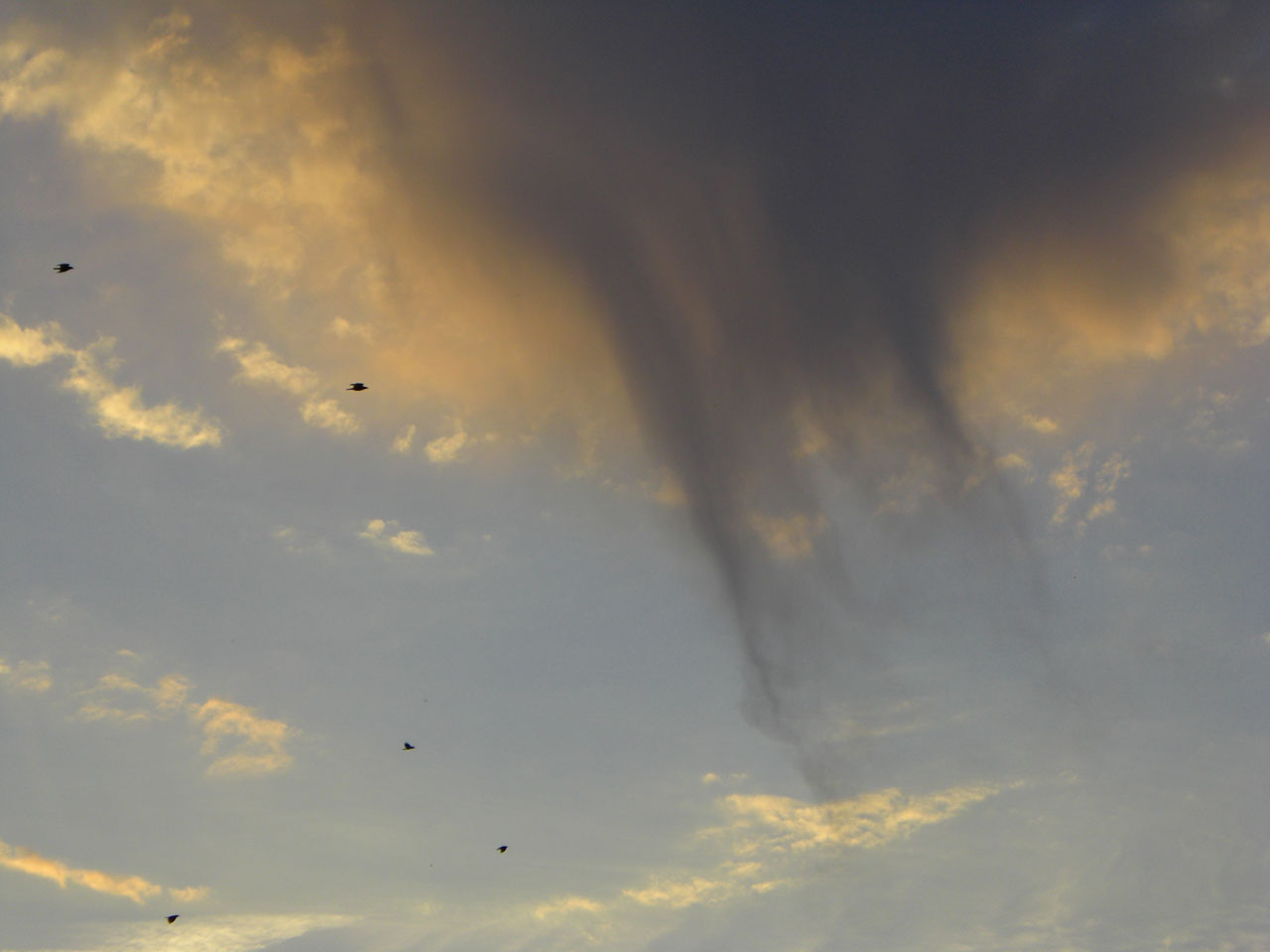 Sometimes rain evaporates before it reaches the ground, resulting in virga.  If you look into the distance and see gray streaks below a cloud that don’t reach the ground, you are seeing virga.

Rainfall rates determine if the rain will soak into the soil or run off.  According to the National Weather Service, light rain is anything from .01 to .1 inches per hour, moderate is anything from .1 to .3 inches per hour and heavy rain is anything above .3 inches per hour.  Contrary to popular belief, raindrops are not teardrop shaped.  Actually, very small raindrops are perfect spheres, and larger drops get flatter as they get bigger.  An average-sized raindrop has a flat bottom, if not a little concave, and the sides and top are rounded.  This shape has been described as looking like a hamburger bun, a parachute, or a jellyfish without tentacles. If a raindrop is near a quarter of an inch in diameter it will break apart before it reaches the ground.

Snow actually occurs almost every time it rains, but the snow often melts before it reaches the ground.  There is a version of virga produced by snow called fallstreaks.  Fallstreaks are typically seen with high, wispy cirrus clouds.  Though snow more easily falls through sub-freezing air, it is possible for snow to fall even when the air temperature is above freezing.  This happens when the snow is falling into very dry air.  With the air above freezing, the snowflakes do partially melt, but because of how dry it is, the water immediately evaporates.  This evaporation leads to cooling right around the snowflake and allows it to reach the ground as snow.  However, snow that falls like this almost never sticks.

Snow can take many forms, including thin needles and flat plates.  The most beautiful are the traditional snowflakes, or dendrites, we see in Christmas decorations or cut out of paper.  Each type forms in a unique combination of temperatures and humidity in the atmosphere.

Sleet and freezing rain occur under very similar conditions.  Sleet is pellets of ice that form when snow falls into a warm layer and melts into rain.  The rain then falls into a freezing layer of air that is deep enough to refreeze the raindrops into pellets.   Sometimes the snow does not completely melt and the partially melted snowflakes refreeze into snow pellets.  Freezing rain occurs when snow falls into a warm layer and melts, but the freezing layer is very shallow, so the liquid water falls onto surfaces that are below freezing and solidifies, resulting in an even coating of ice on streets, trees, cars, and power lines. 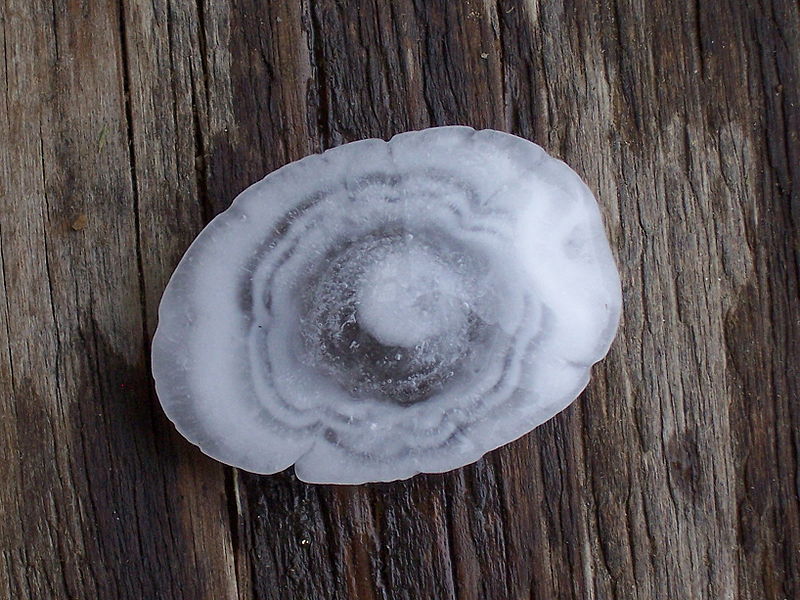 Figure B. A hailstone bisected to show the layers. (Image from Wikipedia).

Hailstones are large chunks of ice that fall from large thunderstorms.  They are highly damaging to crops, easily earning the nickname “the white plague”.  Violent thunderstorms have very strong updrafts that are strong enough to hold ice aloft against the pull of gravity. In Figure B, you can see that a hailstone has layers like an onion.  The opaque layers are created when the hail is in the colder section of the cloud, or gets caught in the downdrafts, and the supercooled droplets freeze onto the hail so quickly tiny air bubbles get trapped, causing the ice to look milky.  When the hail falls into the warmer portion of the cloud, or into the warm updrafts, the supercooled droplets freeze slowly enough that the tiny air bubbles have time to escape before the water freezes, resulting in a sheet of clear ice.   Hail can range in size from the diameter of a pea to larger than a grapefruit.  Hail the size of grapefruits have been known to cause extensive property damage and even fatalities.  But even small hail can cause damage to crops and bruise or mark them, reducing their value. 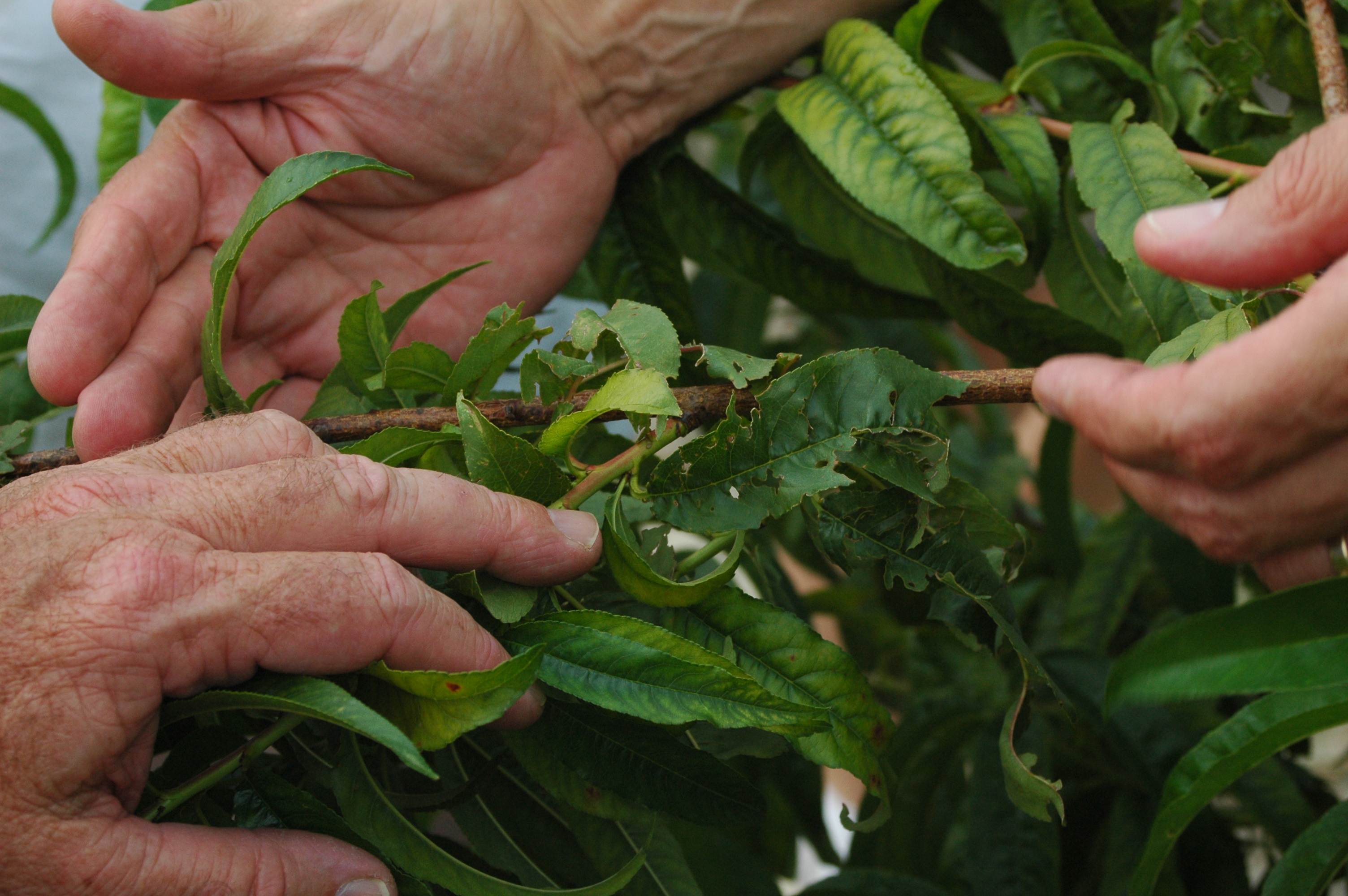 Figure C: Hail Damage to the Leaves of a Peach Tree (Image from Bridget Lassiter) 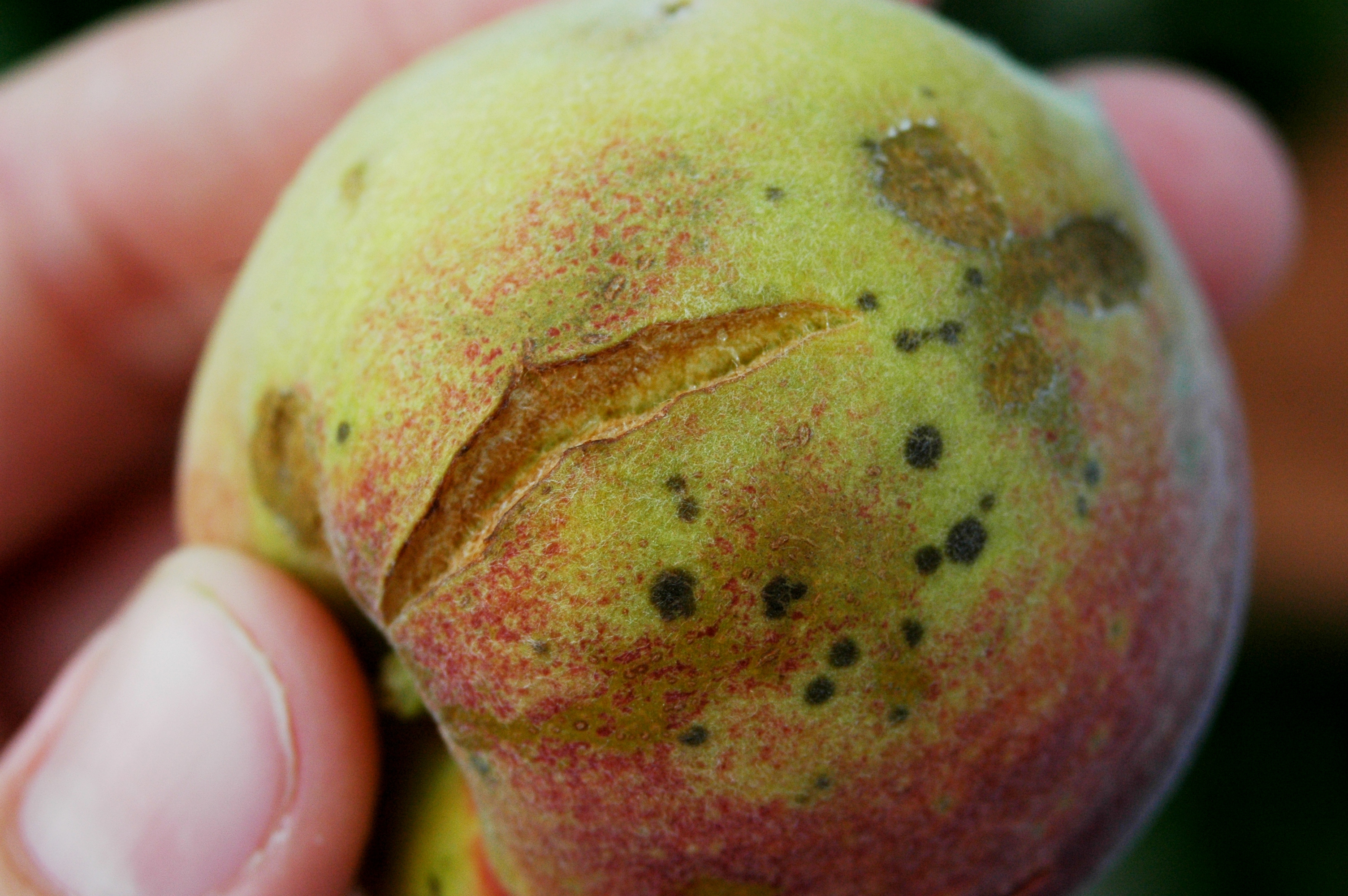 Rain and drizzle are generally beneficial for plants.  However, excessive rain can cause significant runoff and erosion that can damage the fields and wash out plants or drown their roots.  Snow  and sleet can also be beneficial for their water content, but the freezing temperatures that accompany it can cause significant plant damage, although snow can also provide some insulation when the air is very cold.  Heavy snow and freezing rain can also cause a lot of damage to trees, plants and also power lines when the accumulated precipitation weighs down branches and snaps them off. 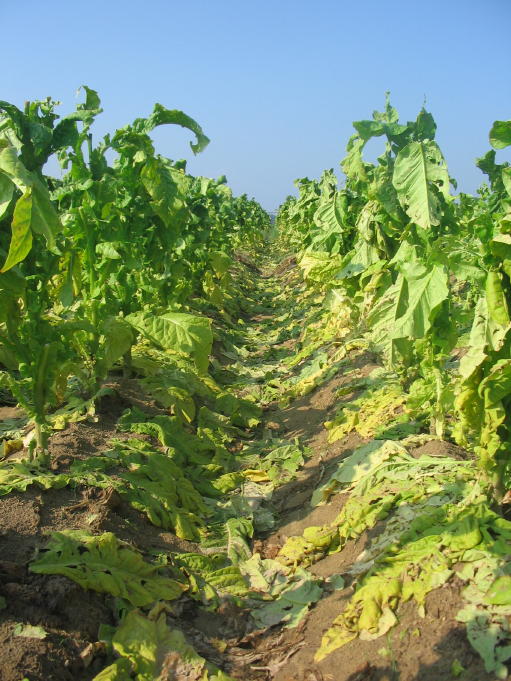 Hail can cause a lot of damage to trees by stripping leaves and by putting bruises or marks onto fruit, reducing its saleability as table fruit and making it suitable only for juice.  It can also crush young plants when it falls.  Large hail stones can also cause damage to animals caught out away from shelter, and have caused fatalities of animals and even humans caught in the open in extremely heavy hail.  The National Weather Service considers severe hail to be stones of greater than 1 inch in diameter, but even smaller stones can cause significant agricultural impacts.